Return of the Giant Chicken from Mars 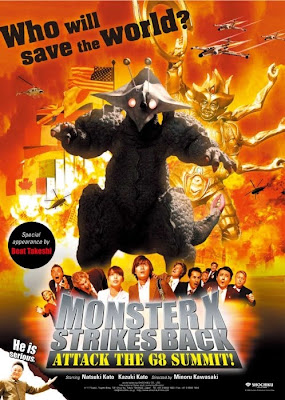 Monster X Strikes Back: Attack at the G8 Summit ~ If you’re going to make a sequel to one of the silliest kaiju eiga, and do it with a straight face, the best way is probably to just make a comedy. That’s what the producers of 2008’s Girara no gyakushû: Tôya-ko Samitto Kikiippatsu did with this insane sequel to 1967’s The X from Outer Space. No apologies, no explanations, just balls out screwiness with Guilala, the monster that looks like a giant chicken from Mars.

In the midst of the G-8 Summit in Japan, Guilala returns from space. There is no reference to the first movie despite the film’s title and the fact that the name (and the lame monster suit) has not changed. One of my favorite scenes comes when a little kid, looking like he walked right out of a 1960s Gamera flick, wanders into the military staging room and provides a name for the monster, insisting he needed one. Each of the G-8 members spends the rest of the film trying hair-brained scheme after hair-brained scheme in attempts to destroy the creature.

Silliness on a Spaceballs scale follows throughout, though the humor rarely reaches beyond the fifth grade or the 1960s. Even Guilala has a laugh while dancing around his small soundstage that he seldom leaves. Beat Takashi makes a crazed appearance as a Daimajin knock-off late in the film, but it’s well worth the wait.

This is more fun that it should be, and funnier than it deserves to be, but worth a peek for kaiju eiga fans – but remember, don’t take it seriously.