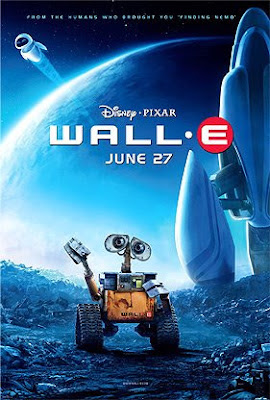 WALL-E ~ “Waste Allocation Load Lifter Earth Class,” Wall-E (pronounced Wally) for short, is a love story and a tale of courage. Writer/director Andrew Stanton originally visualized this Disney/Pixar flick as “What if mankind evacuated Earth and forgot to turn off the last remaining robot?” The story expands from there.

Left behind to clean up mankind’s ecological mess while the human race goes off into space, Wall-E soon finds himself alone in this endeavor. When a robot probe, the super-slick EVE model, lands to explore Earth, clunky trash compacter Wall-E falls in love. Eve finds proof of life and returns to space with Wall-E in tow. The plant she finds leads the remaining humans, made fat and lazy by a life waited on by robots, to believe it’s time to come back home.

There are moments when Wall-E could have been as preachy as the early 1970s eco-scifi flicks like Soylent Green or Planet of the Apes but it rarely strays in that direction. Of course the accusative finger of Corporate America isn’t hard to see in Buy ‘n Large but it’s a point not hammered home like it could have been. In the end all is right and everyone lives happily ever after – a nice change of pace from most ecological disaster movies.

It’s worth noting that the first hour of the flick is without dialogue, an achievement worthy of praise in this day and age. With an economy of lines, Jeff Garlin is wonderful as the Captain and Fred Willard is surprisingly good as one of Pixar’s first live-action actors.

Speaking of Pixar, there are tons of great cameos from previous films among Wall-E’s junk collection and among the debris littering Earth. And don’t miss the cartoon before the feature. “Presto” is one of Pixar’s best. All in all, a pleasant family experience.
Posted by Unknown at Monday, July 07, 2008