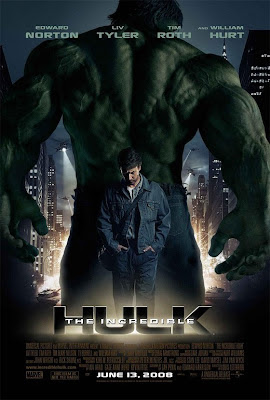 The Incredible Hulk ~ I’m a bit puzzled over the rave reviews for this flick. I mean this isn’t a terrible film, but it’s not a great film either. I do wonder however if the rumored extra 70 minutes would improve or wreck the flick. I think critics are just thankful it was more Iron Man than Spider-Man 3, and most of all that it wasn’t Ang Lee’s Hulk (even though I liked his interpretation).

The extra footage is what may or may not temper this flick, but we’ll have to wait for the DVD for that, hopefully. Also the cut footage was also why star and writer/re-writer Ed Norton would not do any press for the film. He apparently disagreed with its final cut. I don’t disagree at all. Norton frequently puts his all into a project and is not only a perfectionist, but also very passionate. I’m sure the Norton version has a lot more heart than what we’ve seen so far on the big screen.

That said, there were sequences in this film that were just amazing. The opening scenes in Central America show an intriguing village set along the side of a mountain. The first thing I thought was what a great place for a big chase, but only the Bond films do that sort of thing any more. I was delighted to see an exotic locale used for more than just being pretty. The chase rocked.

There is also the college scene where the Hulk is attacked by the military on the college campus. This was a nice homage to the comics as in for most of the character’s early career he fought against the US army. This one sequence rolled like a greatest hits and was done well. Bravo.

The rest of the film had really nothing to offer in the way of the same spectacularity. Honestly the final battles between Hulk and the non-reptilian Abomination were frankly boring except for when the Hulk finally speaks (without explanation I might grumblingly add). The CGI effects were far too dark, fast and blurry for me to marvel at, at least.

What is fun with the rest of the film are the vast amount of Easter eggs and nudges for fans of the comics. There are so many. From the credits with documents flying by signed from SHIELD and Stark Industries to the origin of Hulk archenemy The Leader to the fact that the Abomination is transformed by the same super-soldier serum that created Captain America to the Iron Man star who shows up at the end of the flick. Lots here for the fanboys.

And that’s not even mentioning the nods to the TV series, from direct frame steals from the show’s opening to the appearance of Lou Ferrigno (also the Hulk’s voice) and even Bill Bixby on a TV rerun of “The Courtship of Eddie’s Father.” Also look for Stan Lee in one of his more amusing cameos.

The remaining cast is less than satisfactory in comparison to Ed Norton. Liv Tyler is okay but she's no Jennifer Connolly and her Betty Ross is less than adequate. Tim Roth is good for the time he's on the screen and William Hurt only makes a good General Ross if you've never seen Sam Elliott in the role - one he was born to play. And don't miss 1960s "Spider-Man" voice actor Paul Soles as Stanley the pizza shop owner.

All in all, it’s recommended, especially for comics fans. It’s no Iron Man, but it still rocks.
Posted by Unknown at Monday, July 07, 2008