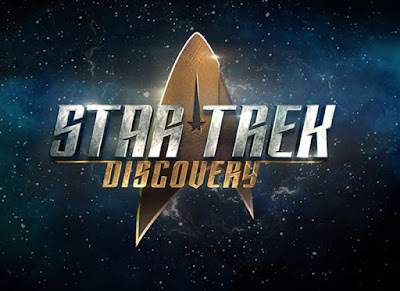 There have been reports before the fact about this series that are the stuff of nightmare, and there is of course the whole concept of having to pay for it as part of CBS' new All Access network, so even before it started, "Star Trek: Discovery" had a hard road ahead of it. First imagined as an anthology series, taking place at any time or place in the mainstream Trek universe (as opposed to in the Kelvin timeline of the last three cinematic films - here, here, and here), this series now might just be about one ship, one crew, and one time - time will tell. 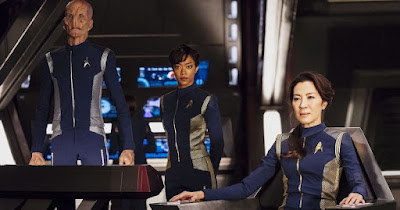 I have been impressed with the previews myself, especially the acting and casting, but not so much with some of the designs, particularly the Klingon ones. Further while I was very happy with the casting of "The Walking Dead"'s Sonequa Martin-Green as First Officer Michael Burnham and one of my favorite actresses Michelle Yeoh as Captain Philippa Georgiou, I was disappointed that Green would take lead as the POV protagonist with Yeoh in a more background role. That said, as with all such things, I should have an opinion until I actually see it, right? It's what separates the Trekkers from the Trekkies, I suppose, pre-perception. 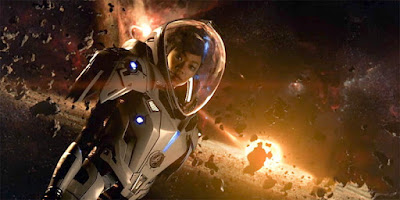 I loved the opening of the first episode, "The Vulcan Hello," as well as the new theme. The composition by Jeff Russo incorporates elements of the original theme, and while it's no country song like in "Enterprise," which I found original, refreshing, and catchy, it is adequate. The visuals are much less exciting, and disappointing. But as noted, the acting and lesson of the intro with Green and Yeoh showed much promise and dedication to the cause. It had my hopes up that I was able to get through the less-than-stellar credit sequence.

Ten minutes in, introduced to Doug Jones' paranoid science officer Saru, and others in the diverse crew of the USS Shenzhou, this was feeling very Trek, from the dialogue, to the uniforms, to the procedural, and I was digging it. This crew gets along, knows each other's quirks, and has a camaraderie similar to later seasons of "TNG." There is however an annoying Motion Picture conceit of showing off special effects and model building, almost like a child jumping up and down and yelling, "Look what I can do!" and it results in scenes dragging and taking much longer than they should. 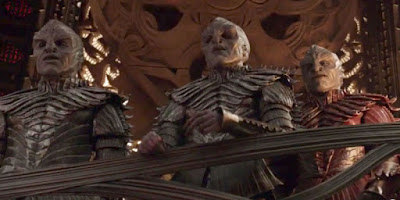 And then there are the Klingons, some might say drastically different in appearance and conduct to what we have known before. They have been known to change their physical appearance in the past, but this is quite different, and quite possibly what drove fans up the wall when images surfaced. We have more gothic, more bestial, more feudal Klingons here, with a darker, larger, more sinister and menacing bird of prey. I am willing to accept this, after all, who knows how much and how fast Klingons might evolve physically or change culturally. 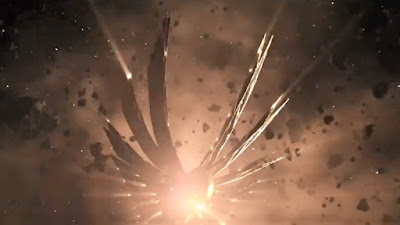 A more sophisticated explanation from the showrunners suggest that the Klingon Empire is huge, and not all Klingons come from Kronos. Their various cultures and styles and even physical manifestations vary from house to house, their system of power, similar to that of "Game of Thrones" in a way. Just like a New York businessman would look different from an Aborigine shaman for instance, these Klingons are just as different as say Kang and Worf are to each other. Seems like a lot of dancing to just make more fearsome alien monsters and not change the name. And once the thought that they were more like "Doctor Who" monsters than "Star Trek" villains entered my mind, it would not leave.

The setting is ten years before the original series, and the USS Shenzhou has discovered a Klingon ship. Burnham, who has a history with the Klingons who haven't but rarely been seen in generations, goes to investigate and ends up killing one of their Torchbearers. Burnham, we learn was the only survivor of a Vulcan-Human space station attacked by Klingons. Her parents killed, Sarek (yes, that Sarek) took her in, educated, and trained her. So this discovery is a hot issue for Burnham. 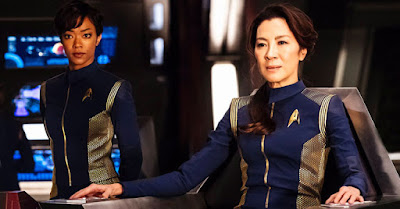 As the episode continues we see more of Burnham, as well as Saru and Geogiou, all doing fantastic jobs. The performances are on mark. Meanwhile we are also learning of Klingon culture and how one house is trying to unite all twenty-four houses against the Federation. The cliffhanger on the first episode is a tight one, and must have been very frustrating for those not subscribed to CBS All Access. My take on this however, based on the first episode, would be it's worth it.

Lucky folks outside the United States got to see it on Netflix, it should be noted. And in watching the second episode, "Battle at the Binary Stars," it's evident that the structure of the show fits Netflix to a tee. This is a binge series, and watched best as a binge. It's episodic, with a binge-worthy flow, interspersed with character-revealing flashbacks - this is a Netflix show, and CBS couldn't have found a better formula to copy. It's damn good. I dug this a lot, recommended.