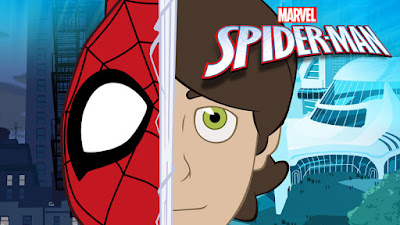 The worst part of superhero reboots is retelling of the origin story over and over and over again. Despite the official Marvel Cinematic Universe version of Spider-Man thankfully skipping over that detail in Captain America: Civil War and Spider-Man: Homecoming, when the folks at Disney XD rebooted the animated version, based on the new movie Spidey, they felt the need to beat us over the head again with that same origin story that we all know now. 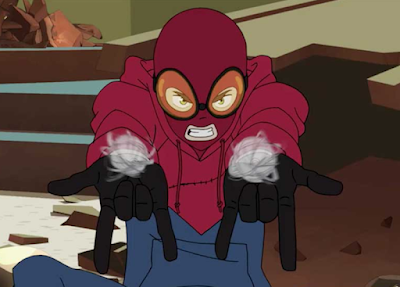 The animated shorts, how Disney XD leads into their Marvel shows these days, tell that story all over again, adding very little to the tale we all know.  Even the terrible Amazing Spider-Man gave us something new in that area.  Peter Parker in this new 'toon is less geeky and nerdy as much as he is annoying and obnoxious.  He's almost arrogant.  Unlike the Parker of the comics who we sympathize with and identify with, I really don't like this guy.  I almost want him to fail. This is so not Spider-Man.  Simply spouting science does not make a Peter Parker. 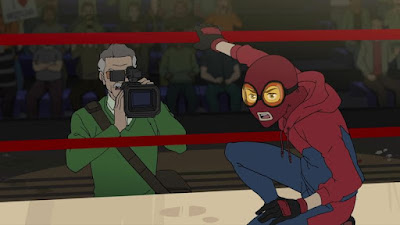 As we watch this annoying kid learn his new powers and video document them with complete arrogance in the "Origins" shorts, the showrunners carefully insert appearances of cast members like Harry, Liz, Smythe, and even a Stan Lee cameo, but key characters like Aunt May and Uncle Ben are rarely seen.  Not seeing May or Ben until the last of six shorts completely diffuses the tragic lesson of "With great power comes great responsibility."

Whether it is network rules to protect children or misguided writing, but we never get to see the actual origin of Spider-Man with the burglar.  It's diluted, and we feel nothing as we don't know Ben or May.  Add this in to the fact that this version of Parker is already unlikable, this was not a great start, and perhaps, as in the MCU version, the origin should have been left untold, rather than told badly. 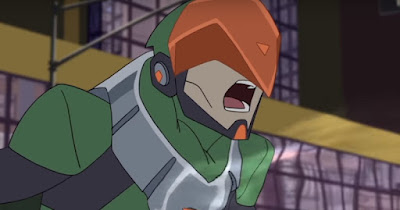 The actual show is better in both execution and presentation of Peter Parker.  He still spouts science, but he's a little more humble.  The depiction of the Vulture is less than stellar, especially after his terrific MCU revamp, this animated mash-up of the Beetle and Black Canary is a bit embarrassing. Much time is spent on school stuff, including introductions of Miles Morales and Anya Corrazon (Arana). Without those name drops, I might have been bored.

Other name drops include vibranium and Wakanda, placing the series solidly within the wider Marvel Universe.  One supposes we will just have to imagine the "Ultimate Spider-Man" cartoon never happened, just like all those early animated appearances of the Guardians of the Galaxy. 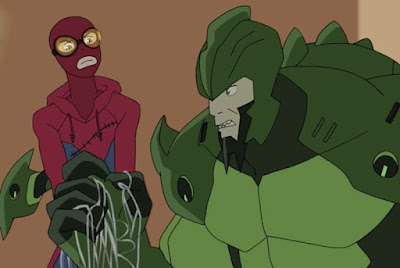 In the second official episode, continued from the first, we are once again more concerned with the school than with the superheroics.  We're introduced to Dr. Otto Octavius as a teacher, and Max Modell's Horizon is lifted from Dan Slott's comics run.  Spider is still in his homemade costume and the Scorpion is considerably less interesting than his Homecoming counterpart. 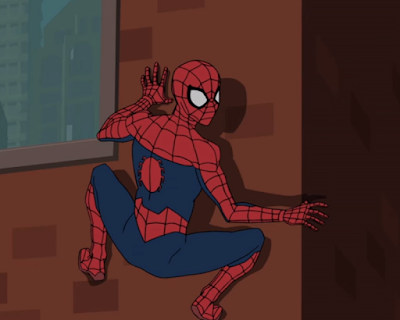 Even after finally perfecting his costume and facing off against a pseudo-Spider-Slayer, the episode is more about the school soap than the superhero saga.  Horizon seems more like a breeding ground for potential future Spider-villains and their tech.  Still this is more origin stuff when I would rather have adventures of the fully formed hero. Later we see the Rhino and the Black Cat, revamped versions, and of course their episodes focus more on school than superheroics.

The new series is not bad, but it's not what I want, so until we get a seasoned Spider-Man doing the superhero thing with the cast in place and rogues gallery established, I may give this a pass.

Posted by Unknown at Wednesday, September 13, 2017