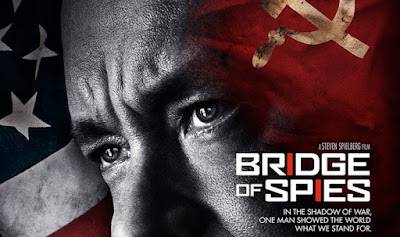 Bridge of Spies ~ The Bride and I got to see this one on one of our Disney Cruises a year or so back, a sneak preview the night we saw it, but I've been busy, haven't had time to post it, and quite frankly after a while forgot I had written it. Bridge of Spies is the story, based on true events, of the spy exchange of Rudolf Abel and Francis Gary Powers in 1960, as told from the point of view of James B. Donovan, the attorney who brokered the deal. At the height of the Cold War and during the building of the Berlin Wall, this was no easy trick. 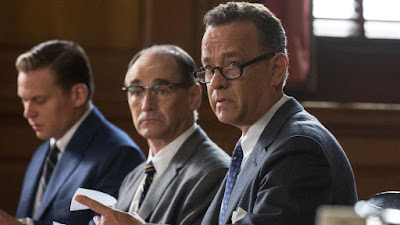 There are good solid performances here, and there should definitely have been more Oscar wins for this one than just Supporting Actor for Mark Rylance's Abel. He was stunning, and Tom Hanks has matured some and gives us his best whimsical and serious at once.

I was surprised to see the Coen brothers as screenwriters, while most of the writing and dialogue is brilliant, there's a fair amount that is equally weak and sloppy. And that 'inspired by true events' tag, that always gets me. I am always suspect of that phrase. If you know your history, this may be boring and monotonous like Titanic or Apollo 13, because let's face it, you already know how it ends. There's no suspense, nevertheless Bridge of Spies a good movie. 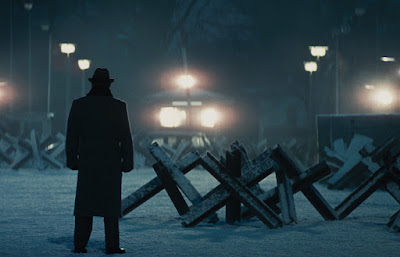 An amusing side note, I could not sit through the first showing, so finished watching the flick at an early morning viewing. There were a handful of patrons, along with a grandfather and several grade school age boys. He was overheard saying to them before the film started that there might be some bad words in it and they shouldn't tell their parents.

Bridge of Spies had some bad language, mostly B words, and every time one popped up the boys would all chime "oooo" and count them. Soon everyone in the audience was counting and oooo-ing as well. It was a hoot. I wonder if they told their parents…