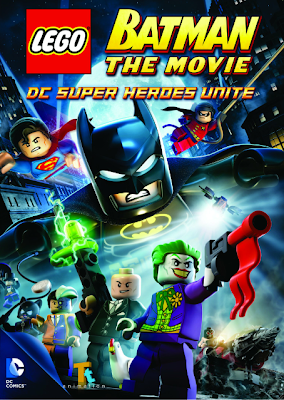 Lego Batman: The Movie - DC Super Heroes Unite ~ I am always wary of movies, books, and even potato chips that have long titles and subtitles, and this one is a doozy. I shouldn't have worried though, because it's Lego, and Lego is always cool, even when I can't play their video games.

From the get-go, this was good. The opening is a Lego take off on the opening credit sequence of Tim Burton's 1989 Batman, and even uses Danny Elfman's great score (and later John Williams' Superman music). And if that's not cool enough, it has Clancy Brown wonderfully reprising his role as the animated Lex Luthor. What's not to like?

The story is simple enough, and accessible to new viewers perhaps not savvy to the DC Universe continuity. Luthor joins up with the Joker to defeat Superman, Batman and Robin, destroy Gotham City, and win the Presidential election. Throw in guest stars from the Justice League and Batman's Rogues Gallery, along with that clever Lego sense of humor, and you've got a very entertaining flick for all ages. 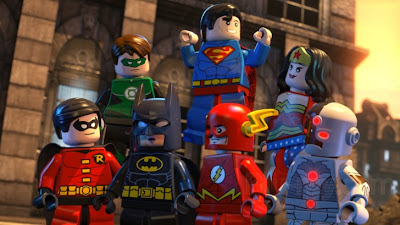 Of course it has all the charm and wonder of the animated Lego stuff, that coolness of hey-I-could-build-that and a wink-wink slyness that the characters know they and their world are made of Legos. The cityscapes and sets of Gotham and Metropolis are stunning. The best part is Luthor's weapon, which is a gun that literally takes Legos apart.

Watching this I can't help thinking that this could probably not only be better than Warner Bros' upcoming Batman/Superman movie, but quite possibly could serve as an excellent script or template. If only...