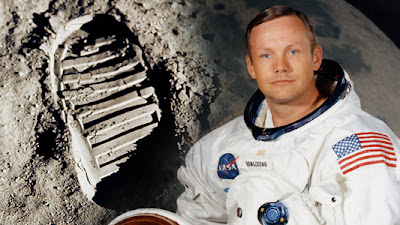 We have lost another great man. Last week, astronaut, explorer, hero, Neil Armstrong passed away at the age of 82. He was the first man to walk on the moon way back in 1969.

Wait a second. Didn't he die last year? Groan. Is anyone else tired of these Twitter and Facebook delayed and fake deaths? How about those folks who read something on the internet and don't check the date? Yeah, exactly. That said, Neil Armstrong was still a good man, a great man, and he should be remembered.

While I don't precisely remember the event, Armstrong walking on the moon, as I was quite young, I was glued to the TV for all of the Apollo missions that followed. NASA, Apollo, space, the moon, astronauts - it was an American past time, it was hysteria, it was like Beatlemania, or Batmania, only real.

Some of my first and most beloved toys were space and astronaut themed. We were all drinking Tang and eating Space Food Sticks, and racing home from school to see the splashdowns. And to many of us, Neil Armstrong was the guy who started it. Godspeed. A year later, and forward.