The Movie I Can't Watch 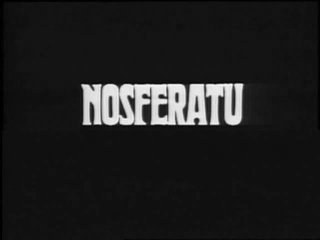 My mother-in-law and I talk about film a lot. An ongoing discussion seems to be that she doesn't like horror movies - or creepy, scary, or anything like that of the kind. She's often puzzled that I do like them. The argument that comes up most frequently is why would someone want to be scared. The point is I don't want to be scared. I wouldn't watch these things if they truly scared me. In fact, there is one movie I will not watch because it does absolutely terrify me.

Nosferatu - A Symphony of Horror ~ This 1922 classic of German silent horror is perhaps one of the greatest and most enigmatic and most legendary of all horror films - and I have made a conscious effort not to view it for years, as when I have, it's given me nightmares, when I was able to finally get to sleep that is. 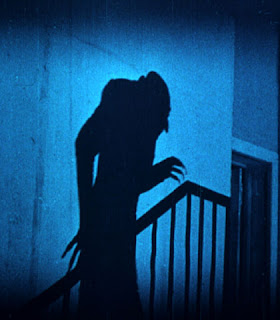 I'm not sure if it's the imagery of the horrifying Max Schreck who played the vampire Graf Orlok or not. I am able to watch movies that emulate the visuals like the remake from 1979, or "'Salem's Lot," or even Shadow of the Vampire, which is about the making of this film. So it just must be the wonderful shadowy direction of F.W. Murnau, and Max Schreck himself. Oddly enough, Graf Orlok only appears on screen for nine minutes, but it's enough. No matter how you cut it, Schreck is scary here. The Renfield character played by Alexander Granach is also pretty fearsome as well.

Nosferatu is an unauthorized filming of Bram Stoker's "Dracula," thus why so many names are changed while the story remains much the same. Because of an ugly lawsuit, Stoker's widow had every print and negative of the movie destroyed. Luckily (depending on your outlook), copies reappeared in other countries around the world. It has since fallen into the public domain, and has been accompanied by several wonderful soundtracks, including one by Type O Negative. 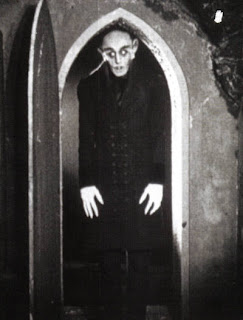 I had mentioned the shadow work previously. It is some of the best ever in film history in my opinion, and the German silents were masters of the artform. And still, I won't watch it. I love watching old movies on the big screen, which is why I'm such a big fan of the Silver Screen Classics on the local Rave, but notably I once turned down a chance to see Nosferatu in a theater, it scares me that much. I probably won't even look at the pics supporting this blog entry.