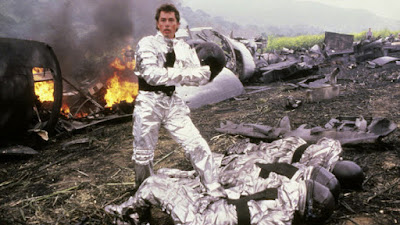 There are changes to the story, including oddly the characters' names, and of course the ugly updating that happens with any remake. Smith lacks the charisma of Bowie, yet brings it off well and is adequately believable. Look for Annie Potts and Beverly D'Angelo, as well as then-future "Star Trek" cast Wil Wheaton and Robert Picardo. I love Wheaton, but he's not good in this at all.

Once the memory of Bowie, and the original movie, can be removed, this flick isn't bad. It's not good either, mind you, but it's harmless viewing, a sometimes painful, sometimes amusing 1980s time capsule. All things considered, it's probably better than it should have been.