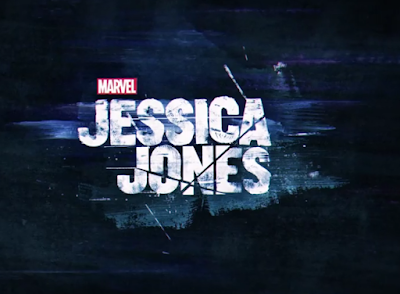 If you're a listener to The GAR! Podcast, you know we talk about "Breaking Bad" a lot, and in the past when it has come up in conjunction with the then-upcoming "Jessica Jones" Netflix series, I have always had one roadblock. Who the hell was/is Krysten Ritter? I get beaten up every time, most recently right here.

I'm sorry, but some folks may have thought Ms. Ritter was amazing as Jesse Pinkman's girlfriend Jane Margolis in her nine episodes of "Breaking Bad," but she never left an impression on me. It's only when I have to be reminded of her role that I remember her, that I recall her, in my opinion, lackluster performance. Ritter in "Breaking Bad," to me, was very similar to her scenes with Mike Colter in the first episode of "Jessica Jones" - a cold fish hardly trying but surrounded by otherwise brilliance. 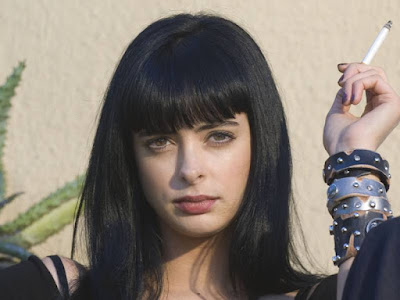 Don't get me wrong. Krysten Ritter's voiceover and solo bits as Jessica are brilliance, the same with her interacting with the other actors and characters. But. The one relationship that is the single most important to the character of Jessica Jones, the one with Mike Colter's Luke Cage, is the one that last episode I just did not believe. Sorry. It doesn't get much better this time around.

I hope this changes with this series. It should be noted that I am reviewing this Netflix series the same way I did with "Daredevil" - one episode at a time, as I watch it. So all you folks who consumed this entire thing in a mad binge watch, chill with the spoilers, because if I get something wrong or am misguided - I probably just haven't gotten there yet. Be patient.

We open on Jessica doing the right thing. Last time she had fallen into The Purple Man's trap for her, and allowed his will to make Midwest girl Hope kill her own parents. Instead of running, Jessica's first instinct, she takes the heroic turn - inspired by her friend Trish - and stays to deal with the authorities. Here at the police station, in mock interrogation, Ritter continues her cool modern day noir character. 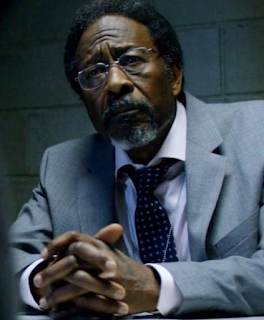 The cop asking the questions, Oscar 'Ozzy' Clemons (Punisher supporter cast if memory serves), is played by one of my all time favorite actors - Clarke Peters, who was probably one of the single best things about both "Treme" and "The Wire," not just two of best shows HBO has ever produced, but also on television, period. Clemons is very close to his character on "The Wire." It's a small part, but Peters' inclusion here is a gigantic plus.

If "AKA Ladies Night" was meant as a tour through a day in the life of Jessica Jones, this episode continues that trend, further exploring the people and tactics in her life. We learn more about her relationship with Trish, we see her check in with Jeri, with Hope, and with Luke. We even meet her upstairs neighbors, bizarre fraternal twins who would make great 21st century additions to the tenants of 1970s horrors Rosemary's Baby and The Sentinel.

We also see what makes Jessica a great detective. We see her at work, we see her methods. The show is still pumping that film noir vibe hard, but I can't but imagine a watered down version of Jessica fitting in well with folks like Jim Rockford, Sam McCloud, and Columbo, just as much as Philip Marlowe and Sam Spade. I like this, she's not just physical, but a thinking detective. 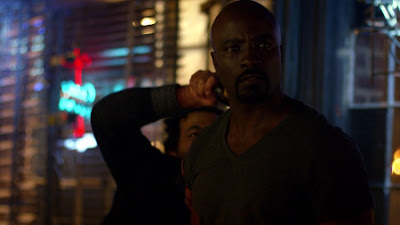 Speaking of physical however, one of the highlights of the episode has Jessica 'saving' Luke from a rugby team, not that Power Man needs saving. There is a certain harmony that she calls "teamwork" while they're fighting the jealous husbands club. Perhaps the chemistry works better when they don't talk. Important about the scene is that he sees that she's stronger than a normal woman, and she sees his effortless strength and unexplainably tough skin. They're peas in a super power pod, kindred souls.

There is also the horror that is Kilgrave. In Jessica's investigation we learn that he did not die by getting hit by a bus a year ago. In some medical stuff just a bit too close to home for me, we learn where this episode got its title and how Kilgrave lost the function of both kidneys, and then mind-controlled his way into two new kidneys. As one who knows the path, it is indeed gruesome. 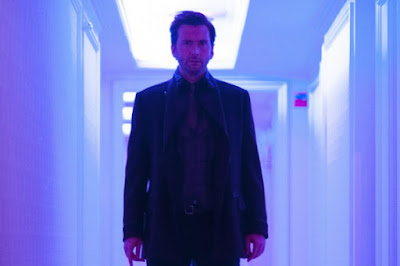 David Tennant also makes his presence known by appropriating a stranger's home for his own. We still haven't seen him face the camera, but he is intimidating and powerful just off screen. Like the neon purple flashes that send Jessica into PTSD, it's more what we don't see than what we do. Speaking of what we don't see, is Trish already Hellcat, or just possibly training for it? Patsy fans want to know!

The episode was written by Micah Schraft who worked for the CW on shows like "Jane the Virgin" and "The Tomorrow People," notably neither of their hit superhero shows, "Arrow" and "The Flash." He might think of making that jump based on this episode.