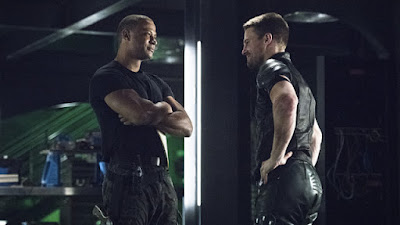 Before we go anywhere this week, I just want to note why the emergence of John Diggle's brother as an actual character on "Arrow" is so weird. Diggle was named in homage of Andy Diggle, one of the Green Arrow writers in the comics. When the opportunity came up to give Diggle some backstory, someone clever behind the scenes thought it would be fun to give him a dead brother named Andy.

Now, this brother is figuring heavily in the current storyline, and it's odd to keep hearing the name Andy Diggle and seeing an actor play him. This is a step beyond the Neal Adams remark a few weeks back, because I doubt we'll ever see Neal. The Andy Diggle thing is different.

Speaking of homages, the trail to find where the H.I.V.E. ghosts are coming from leads to a raid on another corporate entity peddling in super science. Since it doesn't matter the name, at least they decided not to tease us with a real DC Universe company this time like Kord Industries to get our hopes up. This one is Wolfman Biologics, named for writer Marv Wolfman, who did his share of Speedy stories during his reign on New Teen Titans. Ironically, it's also where Diggle finds his brother. 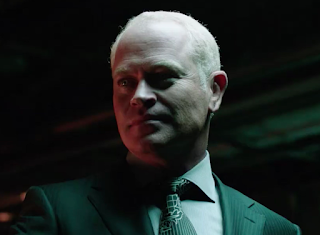 Andy Diggle is alive, and working for H.I.V.E. To get to the point where we find any real information about it is a long road. This episode seems to be about quick action scenes to get to the slow dreary soap opera parts - as opposed to the other way around. Thea is juggling an undercover romance (again?) with Davis, and dealing with her Lazarus Pit blood lust (again??), although it's always nice to see John Barrowman.

The Andy thing brings back the annoying bugaboo between Oliver and Diggle over family and secrets. It seems that the H.I.V.E. ghosts are definitely enhanced by a drug, as well as bound by Darhk's suggestion - and probably dead as well. Ray, coming out his back-from-the-dead funk, pinpoints their home base. It was a thrill to see the Atom join the fight after so long.

The big deal however is Darhk's mini-confrontation of the week. He corners Thea, noting her fighting style as that of R'as Al Ghul, then flips it by asking how her father is. But the whammy is that when he tries to take her heart a la Mola Ram, he surprisingly can't. Lazarus Pit immunity maybe? Weirdly though, the encounter took away Thea's blood lust. 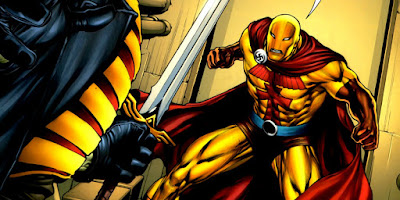 Flashback Island has unearthed a revelation for me in that boss man Reiter was referenced as 'Baron.' Now I am able to place him in the DC Comics mythos. This is the TV version of World War II baddie Baron Blitzkrieg. This Nazi super-villain clashed with the All-Star Squadron frequently, as well as Earth-Two versions of Wonder Woman and Superman. In comics it should be noted the Baron never really had an interest in magic, and on "Arrow," he won't be going by his Blitzkrieg monicker.

Next: the big Arrow/Flash crossover, when Heroes Join Forces, against Vandal Savage!

And then there's this...