While I was never a big fan of his most famous claim to fame, the TV series "Growing Pains," I'm going to miss Alan Thicke, who passed earlier today. The actor, writer, and TV host was known to me for other reasons. As a game show geek, I knew he had composed the themes to such shows as "Joker's Wild," "Celebrity Sweepstakes," and "Wheel of Fortune," among others. He was huge in his homeland of Canada, and was the father of Robin Thicke, but that's not what I remember him for either. 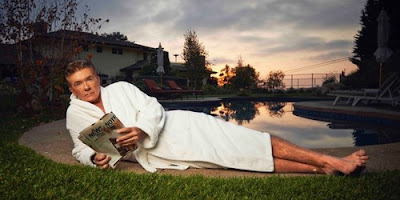 Two accomplishments made Thicke loom large on my radar, first as a writer on the hilarious and sadly forgotten "Mary Hartman, Mary Hartman" spin-off "Fernwood 2-Night," and then as the host of the late night American talk show, "Thicke of the Night." The latter exposed me to many bands, that today I still love (Midnight Oil springs to mind), and Thicke's insistence on giving viewers what they weren't getting from Johnny Carson made it all stand out. I was in the minority, but I loved it, and was sad to see it go.

I'm even sadder to see Alan Thicke himself go. I just recently saw him in a horrendous film parody called RoboDoc, in which he was the best thing. No matter what he was in, and he was in everything as he never stopped working, he was always great, and never lost his sense of humor. Alan Thicke will be missed.