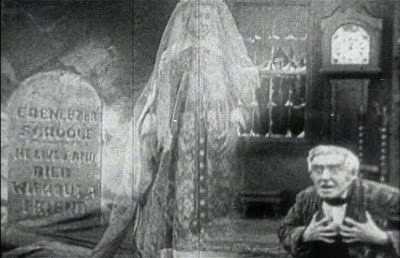 A Christmas Carol ~ This 1910 version of Charles Dickens' classic holiday story is part of the Thomas Edison collection. When Edison was pioneering the motion picture industry at the start of the 20th century, he made dozens of amateur films, among them the first versions of Frankenstein, and this, A Christmas Carol.

Scrooge is portrayed by Marc McDermott, a stage actor from Australia who was a featured player of Edison's. Even without sound, his Scrooge is very George C. Scott-like, and comes across well despite the audio handicap. The short features some of the first use of double exposure filming to create a 'ghost' as a motion picture special effect. As it's only ten minutes long, and in the public domain, you can see the whole thing below: