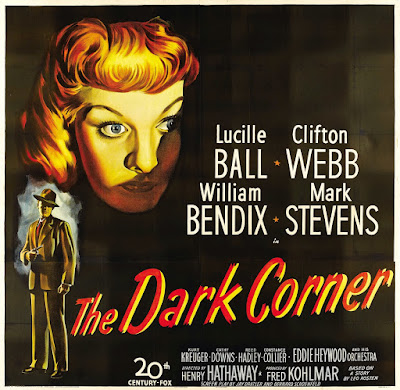 The Dark Corner ~ I remember seeing this when I was a little kid, and of course then the whole novelty of seeing it was to simply see a movie with Lucille Ball. I grew up on Lucy as most of America did. I fondly remember afternoon reruns of "I Love Lucy," morning reruns of "The Lucy Show," and "Here's Lucy" running in prime time on CBS concurrently. She was a television fixture, so seeing this black and white detective flick on UHF was a treat of a different flavor.

Years later when I saw that this was running on board the Disney Fantasy in the Buena Vista Theatre as part of the 2016 TCM Classic Cruise, I had to check it out. The film was introduced by Eddie Muller, the czar of noir, and Lucie Arnaz, the daughter of Lucille Ball and Desi Arnaz - and really if I had to tell you that last part, shame on you, and I know how old you are. Either way, I bet you never knew Lucy made a film noir. 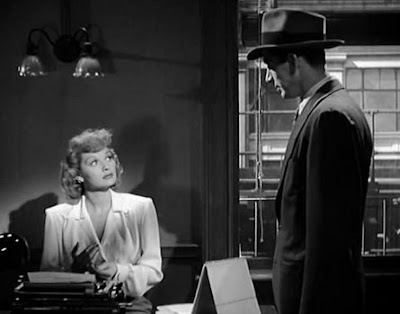 Made in 1946, this taut thriller gave the impression that it was time to poke a bit of fun at the genre. The Dark Corner has a few film noir clichés that it turns on its head and laughs at. Add Lucy to the mix, even though she's the polar opposite of her comedienne character, and there's a lot of fun here. Sadly, she didn't have a lot of fun on set. She was on loan to Fox from MGM as punishment for trying to get out of her contract, and director Henry Hathaway hated her and thought she had no talent, and felt he was being punished by being saddled with her. So this was not a good experience for Lucy, but after hearing what Hathaway thought of her, she was determined to give her finest performance. Not only does she, hell, Lucy steals the movie. 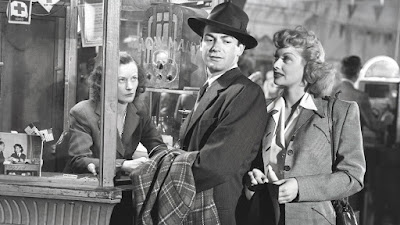 Add in the possible fire between her and male lead Mark Stevens, the only man of whom Desi Arnaz was ever jealous, if that puts this potential onscreen romance in perspective, that makes this flick quite a footnote in Lucy's career. This story of a shady private investigator set up for murder, and his resourceful secretary who helps him out is classic noir, set apart by Stevens' wisecracks and Lucy's fast talking chutzpah, but rooted with Clifton Webb's evil baddie. Check this one out, it's well worth it, and you'll see Lucy through cool new eyes. Recommended.