X - The Man with the X-Ray Eyes 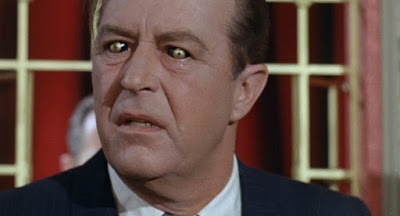 X - The Man with the X-Ray Eyes ~ This is one of those films, much talked about and rarely seen (at least by me). As a longtime listener to Mr. Movie Steve Friedman, I had heard about this movie on an almost weekly basis, and especially the ending. I was very pleased to finally have the chance to see X - The Man with the X-Ray Eyes, especially on the TCM Classic Cruise, and introduced by Ben Mankiewicz and producer Roger Corman himself. 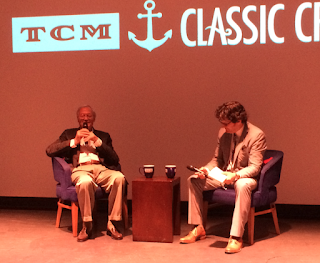 Corman is 89 years old, and after his cancellation on last year's cruise, and seeing him at the port in a wheelchair before boarding, understandably there were some health concerns. There needn't have been. Though with a cane, he walked out onto the stage of the Buena Vista Theatre to a thunderous standing ovation.

Roger and Ben talked mainly about X, as the film's actual title card reads, and how it was made. In typical Corman fashion it was made in three weeks for $300,000. The mad acting skills of star Ray Milland and first timer Don Rickles were also up for discussion, and well deserved. Milland has always been one of the good ones, and I've always thought Rickles was a pretty amazing, if underrated, actor myself. The cast was rounded out by Diana Van der Vlis, an almost dead ringer for Elizabeth Mongomery, and a young Dick Miller.

The existence of another ending was discussed, and that had me both confused, and sitting through to the end of the credits like it was a Marvel Cinematic Universe flick. There's no alternate ending. Much like the urban legend of two different endings to King Kong Vs. Godzilla, it just does not exist. Corman states that the much-talked-about scary ending was made up by Stephen King, but that doesn't sound right either. Sounds like a job for Snopes. 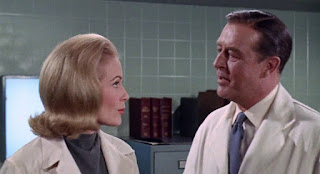 Here, on stage, Corman claimed that the ending was the sole construction of Stephen King, in his book Danse Macabre, but according to Wikipedia (always the worst source on such things, but Snopes had no listing) Corman has in the past said that an ending was shot where Milland, after having torn his own eyes out, screams, "I can still see!" I guess we'll never know for sure. 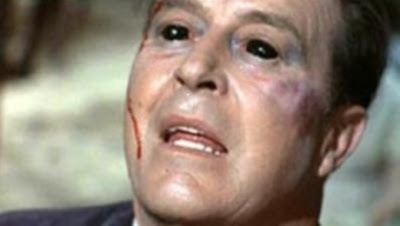 The movie centers on Milland, an obsessed scientist working to improve human vision. So obsessed is he that he tests a new formula on himself, gaining an approximation of x-ray vision. The more formula he puts in his eyes, the more extensive his vision becomes, and of course the more insane he becomes. He wanders through the film, through a carnival, a scam, Las Vegas, and a tent revival, before taking a step into the still-horrific ending.

This was a fun watch, but not much beyond the typical early 1960s scifi fare, but decidedly ahead of its time all the same. Not as cool as I thought it would be, but that said, it just doesn't get any better when it's on the big screen and introduced by the director, a living legend himself.