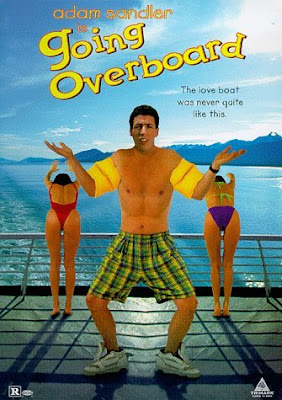 Going Overboard ~ I used to use Adam Sandler as a litmus test for how bad a movie was. I really hated his early work that much. This flick is his earliest, his first, and the one that Adam Sandler wants you to forget. I really don't blame him.

Sandler is a gawky cruise ship waiter with a bad jewfro who wants to be the ship's comedian after the real one drops dead. His routine is that of a bad Catskills comic from the sixties, and he acts like a whiny and unfunny Jerry Lewis clone when off stage.

Billy Zane, Milton Berle, Terry Moore and in an early cameo, Billy Bob Thornton all embarrass themselves in this mess that was filmed entirely on a cruise ship, with the wrong lenses. Thankfully for them, and unluckily for me, Sandler and Burt Young are on the screen the most. The 'heavy metal' band, I think called Croaker, that sings "I'm gonna slap your cat, upside his head" is probably the only real laugh in the whole movie.

Wow, this sucked. Now I remember why I hated Adam Sandler so much years ago.