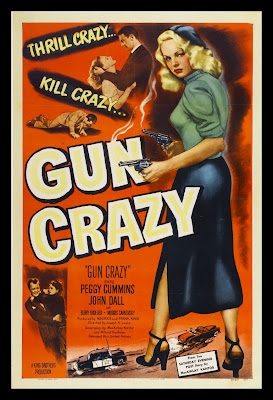 Gun Crazy ~ This 1949 film noir, also known as Deadly Is the Female, was adapted by Dalton Trumbo from the Saturday Evening Post article by novelist MacKinley Kantor. It’s often been compared by film historians as the precursor to Arthur Penn’s classic Bonnie and Clyde - and indeed, the protagonists here are loosely based on the real life Bonnie and Clyde.

The flick opens with a young Russ Tamblyn, listed as Rusty Tamblyn in the credits, as Bart Tare, a gun-obsessed youth. After a spell in reform school and the army, he returns home as played by John Dell – and still gun-obsessed. Once home he meets a stunt shooting gal, Laurie Starr, seductively played by Peggy Cummins, at a carnival and they run away together and get married. 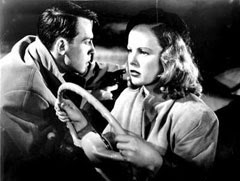 All in all, Rusty Tamblyn was much more believable as a bad guy than the rather naïve and innocent-looking John Dell. But little Rusty was just too young to pull it off. Peggy Cummins on the other hand is excellent as the manipulative brains when the twosome engage in a daring spree of cross-country robberies. She comes off almost like a tough Sandy Dennis, and perfectly portrays the alternate title role.

Director Joseph H. Lewis, who surprisingly later went on to direct TV westerns, is a master here in the use of shadow, symbolism and expressionism. His take is actually evocative of Fritz Lang and Val Lewton in my opinion. This is great film noir juiciness, recommended.