Doctor Who: The Time of Angels 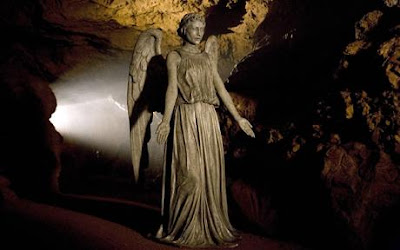 One of the most frightening new monsters of the second incarnation of “Doctor Who” has been the Weeping Angels who appeared in the Steven Moffet-penned episode “Blink.” These demonic angel statues don’t move as long as you don’t stop looking at them – but if you blink, you’re dead. With Moffet now in charge of the series, the fourth episode of the fifth season features their return.

But Moffet couldn’t just let eleventh Doctor Matt Smith and his companion Amy Pond, played by Karen Gillan, just deal with the Angels, could he? He also threw Professor River Song into the mix just to shake things up. This woman, portrayed by former “ER” star Alex Kingston, has met the Doctor before, but not yet in his lifetime, and knows a lot about him, intimate stuff – leading some fans to speculate she might be his future wife. 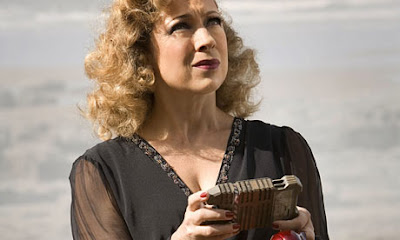 Officially she’s from the Doctor’s future and his current incarnation is from her past, to quote the Doctor, ”Time travel, we keep meeting in the wrong order.” This episode intimates that there may be quite a bit more to River Song than we may have suspected. May I throw a monkey wrench into the guessing game? What if she’s the Rani? Discuss.

The crux of “The Time of Angels” is that a starliner has crashed and there’s a Weeping Angel inside – River Song, along with the Doctor’s help is after it. This is where Moffet puts the screws to us with the horrifying fact that even images, like video footage, of the Angels can move if you blink. It’s one of the scarier moments with Amy in the middle. 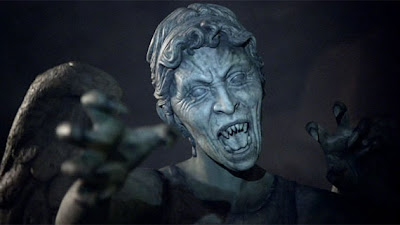 Guided by a madman’s book our heroes explore a labyrinth of the dead, decorated by statues, which is where the starliner crashed. If that’s not creepy enough, it seems they are all Angels. This episode is to “Blink” what Aliens was to Alien, and this is not a horror you can nuke from orbit, or from behind your couch either. And it’s to be continued.

What will happen? Tune in next week, same Who channel, same Who time. Season five just keeps getting better and better.