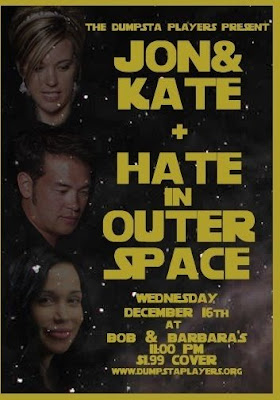 It's the Dumpsta Players' annual X-mess show, starring the most dysfunctional family we know! Wouldn't you like to see them leave this planet -- in drag?

PETEY VS PATTY PONZIO
KATE VS OCTOMOM
JON VS NUEVA GABOR
HAVE YOU CHECKED THE CHILDREN?

It's the end of the year and it's time to take out the trash! The first to go is Bucks County's two biggest douchebags: Jon and Kate Gosselin and their unfortunate brood.

They might be splitting up, but there's always more money to be made! As they relentlessly rehearse the children at Ponzio's for their last hurrah, "The Regis Philbin Christmas Special," Jon storms out and into the arms of Octomom, who's really an alien. How do you think she had all those kids?

She kidnaps him and takes him to Planet Glamatron, where her leader Nueva Gabor has other plans for Jon. Kate shows up to fight for her money, I mean man. But then they realize that they forgot to feed the children! What about the children? Didn't there used to be eight of them?

Find out in... Jon and Kate Plus HATE In Outer Space!

Email ThisBlogThis!Share to TwitterShare to FacebookShare to Pinterest
Labels: bob and barbara's, christmas, dumpsta players, jon and kate plus 8, stage