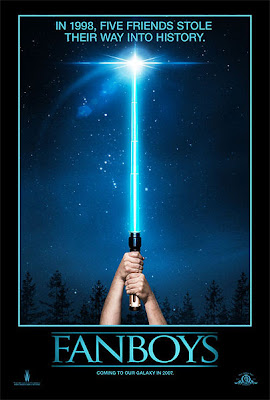 Fanboys ~ Four Star Wars fans travel cross-country and have adventures on a quest to see Episode 1 before anyone else – the dream of one of them who’s terminally ill. This is a road picture plain and simple, chockfull of wonderful cameos like Billy Dee Williams, Carrie Fisher, William Shatner, Harry Knowles and a particularly hilarious one by Kevin Smith and Jason Mewes. Chris Marquette, late of “Joan of Arcadia,” is also good here.

While it’s respectful and infinitely knowledgeable of the genre, unlike previous mockumentaries like Trekkies, it doesn’t seem to know that it’s own title is somewhat derogatory in itself. Behind the scenes horror stories aside, and there are many, this is a fun homage to Star Wars and the entire genre.