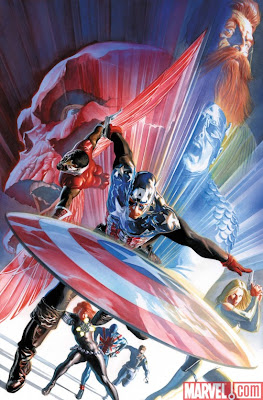 Nobody stays dead in comics. *

It is always both a very exciting and a very disappointing experience when comic book cliches turn out to be true. Well, it happened again today with the special Monday comic book release of Captain America: Reborn. Yeah, as you might guess from the title, Steve Rogers is coming back from the dead.

Two and a half years ago, under mind control, Captain America's secret agent girlfriend shot him in the chest multiple times. We had a body, we had no pulse or heartbeat, and the body was buried in the Arctic wastes - don't ask. Apparently it may not have happened the way we saw it or the way the girlfriend remembers it. As long as Mephisto isn't involved...

Reborn is a five-issue monthly mini-series starting today, with the regular Captain America title taking a hiatus until it's done. Need to find a comic book shop near you? Try here or call 1-888-COMIC-BOOK.

* except for Ben Parker and Thomas and Martha Wayne. For the moment...