…And Ann B. Davis as Alice 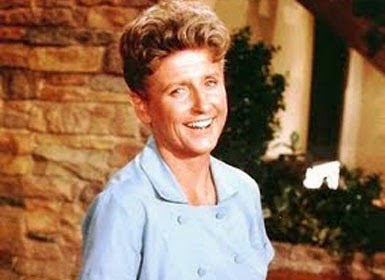 As a child of the 1970s, I grew up with Alice Nelson as played by Ann B. Davis on "The Brady Bunch." Alice wasn't just the comic relief on the show, she was the heart of The Brady Bunch. We identified with the kids, and Carol and Mike were just like our parents, inaccessible adults who we really couldn't relate to - but Alice, Alice was the adult who could relate to the kids. She was part of their lives. She was the kids' and our link with the adults.

In the over the top 1995 movie based on the show, Alice was simply the comic relief, hysterical and absurd, but Ann B. Davis (not playing Alice this time in a guest role) was the heart, and more than the heart, the voice of reason in the end. For everyone who grew up on the show, and didn't laugh at the fashions because we were wearing them too, she was the best part.

Ann B. Davis got her acting chops on "The Bob Cummings Show" for which she won two Emmys. She worked in television, in commercials, and on the stage for years, but was known most for the role of Alice. She even cashed in on the fame with a Brady Bunch cookbook. Ann never married, and was a staunch Christian, so much so that she reputedly shut down a local stage production based on the Brady Bunch because it featured drag performers.

Personal life aside, she was a television icon, and she will be missed, but will live on in syndication for generations to come. She died this past weekend after a fall in her home. Ann B. Davis was 88.