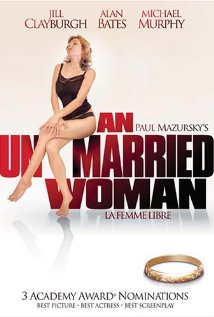 An Unmarried Woman ~ Continuing my coincidental journey lately into the swinging seventies, today I'm looking at Paul Mazursky's An Unmarried Woman starring Jill Clayburgh. As far as the late 1970s went with movies, it seemed that Clayburgh was the female Peter Fonda. She was in everything, or at least it seemed that way. This was the movie that really bolted her to superstardom with multiple award nominations. Let's see how it holds up in the 21st century.

Inexplicably I tend to mix this movie up with the more exciting Looking for Mr. Goodbar starring Diane Keaton, another 1970s icon. The difference is that Goodbar had a plot, and was entertaining. 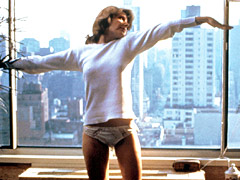 An Unmarried Woman, the story of a newly single woman adapting to her new lifestyle, and it's boring. Where it is amusing (and I doubt it's supposed to be), it appears to be a parody of itself. Where it may have been daring and innovative for 1978, it's been done better by "Sex and the City," which has been very recently outdated and trumped by HBO's "Girls."

When it's boring, it's painfully so. When it appears to parody itself, most of the time it's not funny. While it may have been first in many if its conventions, without that knowledge it comes off as bad melodrama. In that same sense it's also fairly predictable.

Frequently I wanted to just sit Jill Clayburgh down and force feed her a sandwich she's so scary skinny in this. I can barely stand it when she's undressed. I don't feel turned on, I feel worried and want to comfort and ask her if she's all right. So thin, she looks sickly. 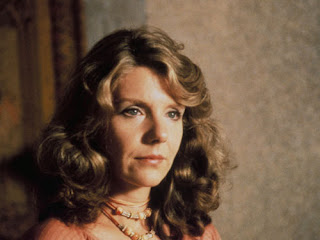 The worst part of the movie experience is the relentlessly, horridly, overly dramatic and boring music of, believe it or not, Bill Conti. There were segments where I muted the sound and just read the closed captioning.

Now it's not all bad. In its time, very important words, this was a groundbreaking film. Women were rarely empowered in film before An Unmarried Woman, and Jill Clayburgh's performance inspired a new generation of actresses. Worth seeing, if only for the historical prominence, or to compare from your first viewing in the seventies. Now I'm going to hunt down Looking for Mr. Goodbar.