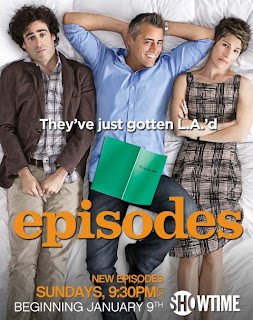 I absolutely love this new series from Showtime. The Bride and I are big Anglophiles and we love British television. We are frequently disappointed however when American television networks try to adapt a much loved British program for those apparently dumbed down American audiences. One prime example comes to mind - "Red Dwarf" and "Homeboys in Outer Space." It is still truly the stuff of nightmares. And let's not even mention the Fox telemovie version of Doctor Who, canon or not.

"Episodes" is a series about exactly that - Americans ruining British television. The best part is that it's actually a BBC program. Writers Bev and Sean, played expertly by Stephen Mangan and the wonderful Tamsin Grieg (from one of my fave Britcoms, "Black Books"), are the creators of a successful series purchased by a American network executive who's never seen it.

Task one, they recast it. In the title role of the elderly schoolmaster, they place Matt LeBlanc, having far too much fun playing a parody of himself, and reset him as a hockey coach. They additionally change the title of the show to "Pucks," even though it originally had nothing to do with hockey. And that's just the beginning. I'm loving this, check it out.