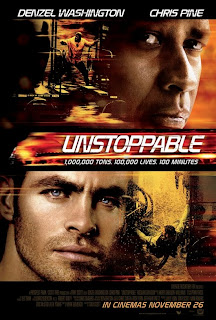 I wasn't expecting much, in any of the choices really, but at least here, Denzel Washington usually picks excellent scripts, even when it comes to mindless action flicks. I have to say I was impressed. Except for the first five to ten minutes of character set-up, and of course a quick crash course (pun unintended) in trains and how they work, this film was non-stop tension and suspense.

Even when Denzel and Chris Pine were not directly involved in the tension, you knew eventually that Denzel and young Captain Kirk would be in the thick of it soon and save the day. If I had complaint, it would be they should have been in the mix much earlier. Denzel easily plays the hero while still acknowledging his age, giving Pine a chance to shine age appropriately, which is not only realistic, but courteous as well. And I could just look at Rosario Dawson forever. 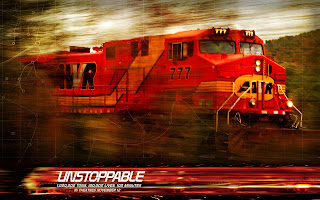 I wouldn't have thought walking in, but Unstoppable is a hell of a nail-biter, a thriller worth seeing. It never lets up and delivers what it promises. Check it out.