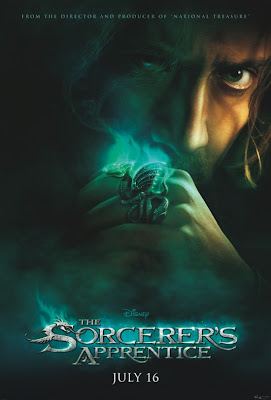 The Sorcerer's Apprentice ~ I am not a Nicholas Cage fan, and usually the words "starring Nicholas Cage" translate for me as 'skip this film.' I liked him in Leaving Las Vegas of course, and Wild at Heart, and Fast Times at Ridgemont High where he barely spoke, and I am probably one of the few folks who will admit to liking him in Ghost Rider - but for the most part, I think he's crap. He's a one note, one joke actor who got lucky with one or two roles and has a talented family to help him along, nothing more.

All that said, I really enjoyed his latest flick The Sorcerer's Apprentice. It's a different kind of Disney vehicle. Rather than build a film around a ride a la Pirates of Caribbean, this time Jerry Bruckheimer and company have constructed a movie around an animated short from 1940's Fantasia, "The Sorcerer's Apprentice" starring Mickey Mouse. What at first, like the ride idea, sounds ridiculous actually comes off rather well. And surprisingly, the sequence in the film that reenacts the cartoon is one of the weakest, and yet still holds up. 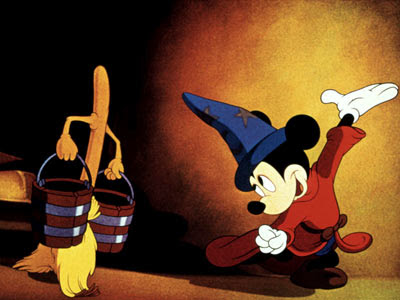 This is a pretty simple and clichéd fantasy story. Merlin vs. Morgan le Fay in ancient times continues today on the streets of New York City with their seconds-in-command and their apprentices. Nicholas Cage is Merlin's apprentice, charged with finding the next Merlin, Jay Baruchel, who just wants to impress his potential girlfriend who he's crushed on since he was a kid. The relationship between Cage and Baruchel is a warm lock, like quarreling brothers who really do care about each other. 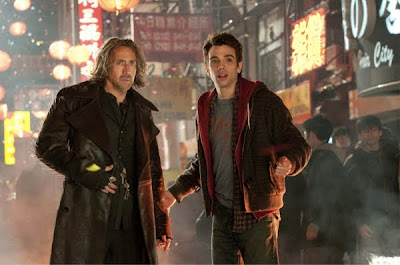 Alfred Molina, who is becoming more and more chameleon-like in Gary Oldman fashion, brings the heat as the bad guy. Tony Kebbell does a hilarious take on a Criss Angel-type magician. The girlfriend, Teresa Palmer, is kind of bland, but the rest of the cast makes up for it. And there is far too little Monica Bellucci. The special effects are top tier, and the ending is a bit predictable if you're paying attention.

This was a pleasant surprise, might be intense in some places for the kids, but definitely family fare. Also look for hidden Mickeys and other references to the original cartoon. Lots of fun, recommended.