Clash of the Titans – Old School 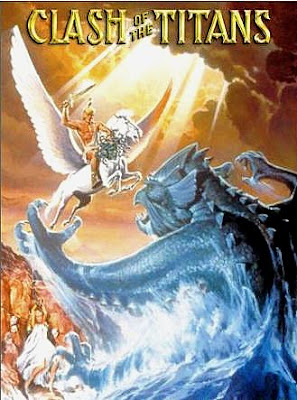 I love Ray Harryhausen, and I love mythology. This springs from an early exposure to the Harryhausen films, especially 1963’s Jason and the Argonauts. In the days before home video local Philadelphia UHF channel 29 had the practice of showing the same movie every weeknight for a week – one of these was Jason, and I loved it.

Later when I saw Harryhausen’s other work, like the Sinbad films, and especially the non-mythic It Came from Beneath the Sea and 20 Million Miles to Earth. His stop-motion work was unparalleled, and even his frequent ridiculous tirades about how Godzilla ripped off his The Beast from 20,000 Fathoms (it wasn’t even his) didn’t spoil my love and respect for him. Previews for 1981’s Clash of the Titans however, did.

The effects I saw in the previews were stiff and very unimaginative. They were very unlike Ray Harryhausen’s work of the past in my opinion. And shouldn’t the previews spotlight the best a movie has to offer? It was a known fact that the stop-motion process was painstakingly slow, and an equally known fact that sometimes Harryhausen took drastic shortcuts (case in point – the six-tentacled octopus in It Came from Beneath the Sea), but nothing to my mind could excuse what I saw. I was to learn years later that this was the first film for which he had assistants, and that they had done much of the work. Still, the previews were enough to turn me away from seeing Clash, until now. 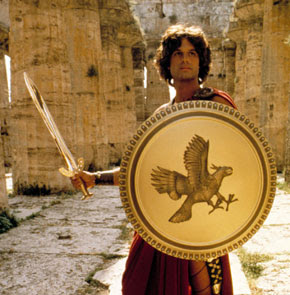 I have to say I think my initial reaction was dead on. The Kraken’s first appearance shows little movement and a lot of bad matte screen effects. The acting is horrendous. Harry Hamlin is barely passable, and folks like Laurence Olivier and Maggie Smith should just be ashamed of themselves. Even Sian Phillips, the brilliantly evil Livia of "I Claudius," is only adequate as Cassiopeia. Only Burgess Meredith turns in a decent performance, and he has to share it with a horrid metal owl.

That bedamned owl. What were they thinking? That a movie about mythology, even fractured mythology, needed an R2D2? Wow, and that’s a bad wow, not a good one. I was just about getting used to the bad seventies hair and the bedazzled armor and then this owl shows up. Oh man. And then there’s the two-headed dog – because a three-headed dog would have been harder to animate. 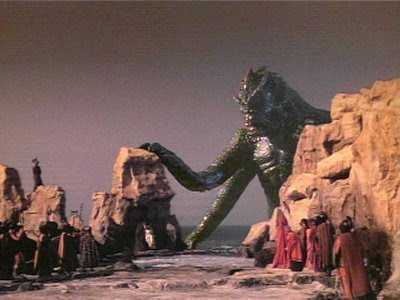 The Kraken in the climax is slightly more mobile but still unimpressive. For a final big bad, it pales in comparison to Harryhausen’s earlier work. Talos and the Ymir (which it kind of resembles) are vastly superior. The seemingly boneless arms are the most ridiculous in my opinion. There is very little menace to the Kraken as far as I’m concerned. What boggles my mind most is how much more superior Jason and the Argonauts is, and it was made in 1963, nearly decades previous, and the special effects are stunning comparatively.

I really didn’t like this much at all, standing by my initial opinion some three decades previous. Here’s hoping the remake is better.