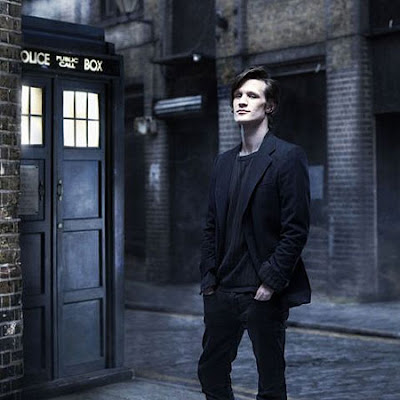 Last night the fifth new season of “Doctor Who” began on the BBC. As anyone who knows about the mysterious time traveler will tell you, The Doctor is a unique character as he can regenerate when he dies. This trick allows new actors to take on the role when the previous has grown tired of it. It also allows for sometimes a virtually new kind of character to emerge. Thus is the case of Matt Smith, the youngest actor to portray The Doctor, causing many in doubt to call him ‘Kid Who.’

Season five’s opening episode “The Eleventh Hour” opens with a bang. The newly generated Doctor is trying to climb back into the runaway and about to crash TARDIS over London and nearly misses getting his goodies snagged by the top of Big Ben. An opening that promises excitement is always good, and it’s quickly followed up by the new series intro and theme. As opposed to other previous versions of the theme, this one grabbed me right away.

Any urge that one might have to say Matt Smith is a bit young is almost immediately diffused by the introduction of companion Amy Pond as a little girl. Ha, got you, the first new companion is a bit too young. She catches up though, and the young Karen Gillan (who had previously appeared as the soothsayer in the Pompeii episode early in season four) is in my opinion a spunky and refreshing mix of Rose, Martha and Donna. I like her. 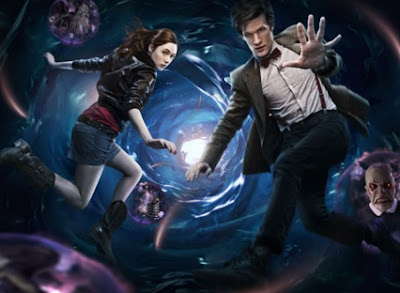 There is quite a bit of charming mischievousness and understated menace of David Tennant in Matt Smith’s Doctor. The rest takes a bit of getting used to but I really do like him. The climax of “The Eleventh Hour” definitely cements Smith as The Doctor in my opinion however, very strong presentation. My favorite line of this new incarnation - ”I’m the Doctor, I’m worse than everybody’s aunt.”

Stephen Moffet, who takes over the series from departing Russell T. Davies, delivers a very tasty script featuring not only the best of a new regeneration, the establishment of a new order, new subplots and frightening new aliens. Still not sure about the new TARDIS having the old set from "American Bandstand," but I'm sure I'll get used to it. I really did love this. I’m not going to pass judgment and say it’s better than the old, but it is quite terrific.