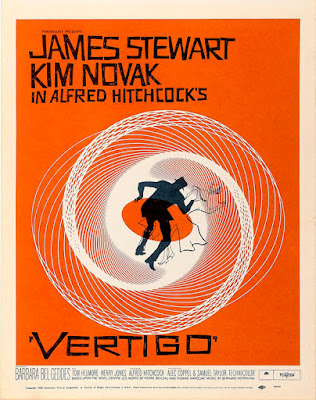 Vertigo ~ On the last TCM Classic Cruise I saw Spellbound and didn't like it.  Yeah, I know, save it for someone who cares.  Anyway, at the start of this Cruise I saw Vertigo on the schedule and my addled mind got them confused, so I didn't go.  I regretted it after I realized that Vertigo was not Spellbound.  So when the second chance to see it popped up, I jumped on it.  No Kim Novak introduction this time, but still I got to see it on the big screen, and really, how can you beat that?  That aspect even made Vertigo better for me.

Vertigo is one of Alfred Hitchcock's crowning achievements, and while I had seen it decades ago, it was at a time before remastering, before the restored soundtrack, and most importantly at a time when I had little appreciation for film, and only a black and white TV.  Believe me, that makes a world of difference.  For 1958, this film is brilliant, and for 2016, it's still brilliant. 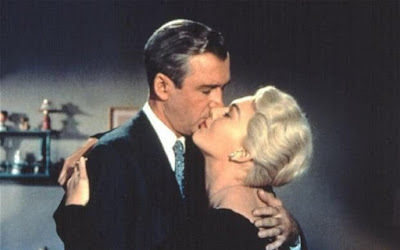 In this complex plot of deception and mistaken identity, Jimmy Stewart plays Scotty, an ex-detective with vertigo caused by acrophobia.  He's hired by an old friend to trail his wife, played by Kim Novak.  Things get even more complicated when Stewart falls in love with his target, and the madness spirals from there.

The film not only features Stewart and Novak in some of their best performances, but has a (pardon the pun) spellbinding score, and masterful special effects enhancing the fear of heights and dizziness felt by the character Scotty.  The remastered vibrant 1950s technicolor also gives the visuals that extra kick.

I love Vertigo, and after seeing it in this format, I love it more.  Now I'm kicking myself of course for missing it the first time with the introduction by Kim Novak.  Recommended, a must-see classic, it's not Spellbound.