No matter what your point of reference is - angel of death, mercy killing, DNR, assisted suicide - it all comes down to the same thing.  Someone, usually terminal, can't live with the pain of life and/or illness any more, and are unable or unwilling to do themselves in, and need a helping hand to end their misery.

I get it, I really do.  I can't imagine anything worse than the helplessness of a body that has turned against you and is killing you slowly and painfully.  The on-the-nose "Mary Kills People," a show out of Canada airing on Lifetime, is the fictional story of Dr. Mary Harris, played by Caroline Dhavernas, who also gets it, and is in a position to do something about it. 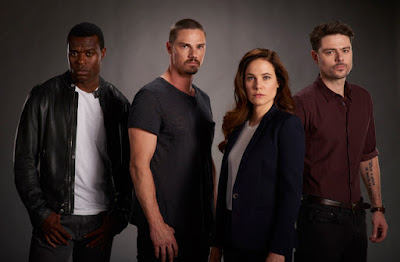 Assisted by friend and ex-doctor Des, played by rugged Karl Urban lookalike Richard Short, Mary helps people in need of such things a painless peaceful send off.  Stalked by a pair of cops, a drug dealer, and raising out of control daughters make things a bit more difficult.

The cast and the story pulled me in almost immediately.  And despite the content, this drama has a touch of black humor that keeps it from getting too depressing.  I'm glad I found this show, definitely worth checking out.  Recommended.