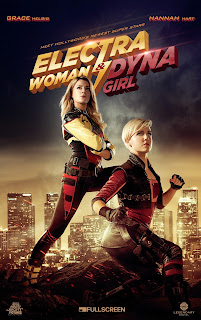 If you listened to The GAR! Podcast's interview with Bryan J.L. Glass at this year's Camden Comic Con, you know how big a fan of Sid and Marty Krofft's "Electra Woman and Dyna Girl" I am.

The very short-lived series aired Saturday morning in the disco spandex era of the late 1970s. Though it looked kinda cheap because it was shot on videotape, it was a loving send-up of the camp superhero antics of the 1960s "Batman" TV series, and also had something we just don't have today - female lead protagonists, as Kristin Battestella and I discussed recently on Morning Coffee, more on that here.

Imagine my surprise when this rather unorthodox preview dropped…

The new version will be a digital series from Legendary and star YouTube phenomena Grace Helbig and Hannah Hart in the title roles. Hmmm… we'll just have to wait and see. What do you all think?