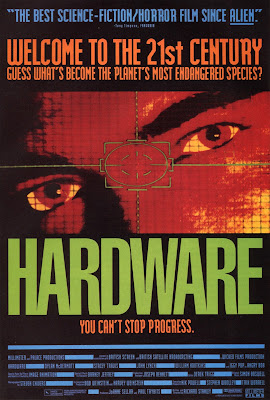 Someone recently recommended Lost Soul to me, the recent documentary about writer/director Richard Stanley and his journey making 1996's The Island of Doctor Moreau. Before I watched it I thought I might revisit Stanley's first mainstream film, Hardware from 1990.

I remember being very into cyberpunk when Hardware came out, seeing it the Friday night it was released, and liking it enough to buy the VHS when it became available - but if I'm being honest, I remember almost nothing else. It was one of those videotapes I owned, put on the shelf, and never watched. Yes, it's time to watch Hardware, but on Netflix, the VHS is long long gone now.

Hardware portrays a post-apocalyptic world some time in the 21st century with nations at war and radiation everywhere. The technology is dated, yet somehow refreshing, even if the fashions are very 1980s MTV doomsday. Written and directed by Stanley, and based on a short story from 2000 A.D., is the story of a sculptor who inadvertently reactivates a killer robot from collected junk, which then rampages. 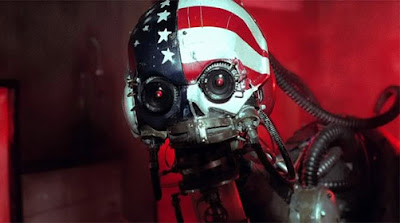 This is both something we've seen before and yet haven't. Stanley adds a punk attitude and style to old school scifi and horror, then turns the dials up to eleven. Hardware is sexy, dirty, and slick, fastpaced to a eclectic score and soundtrack. I found I still dig this after twenty-five years, and had to scratch my head about why I hadn't seen either of Stanley's other two films, Moreau and Dust Devil. 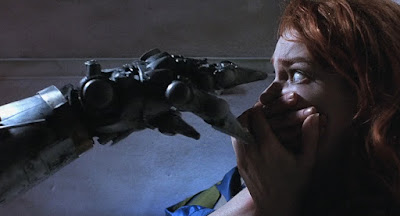 Stacey Travis, John Lynch, and pre-"Practice" Dylan McDermott are very good and better than the usual for this kind of genre flick, but the movie is quite easily stolen by Motorhead's Lemmy, and Iggy Pop as DJ Angry Bob. Hardware was a pleasant ride through cyberpunk nostalgia, recommended, but not for the squeamish.