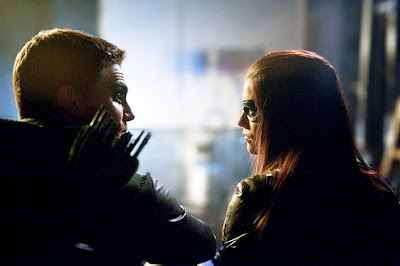 When last we left our CW prime time drama loosely based on the comic book superhero Green Arrow - Oliver and Helena had find each other kindred spirits in revenge, justice, and romance; Walter had returned home to care for Moira; Tommy was making time with Laurel, and had been financially cut off by his dad - finally revealed as the mystery character played by John Barrowman. Up to speed? Good, here we go with "Vendetta."

I have to confess I was a bit taken aback when I saw that Arrow was going to try to take the Huntress (never named thus in the previous "Muse of Fire" by the way) on as a sidekick/partner to train. It's not something that had occurred to me. He teaches her archery in a rather clever scene. She of course opts for a crossbow. At first, at least.

Arrow and the still unnamed Huntress make their debut against a warehouse full of drug dealers. Nice little fight scene. While Jessica DeGouw's acting has not improved, she does look good in costume, purple and black with a crossbow and cross motif. I would have questioned it if it had a cape, but I gotta say I would have liked a cape a whole lot more than this long coat. Sorry, it's an accepted conceit - superheroes wear capes. Deal with it. And the similarity to Hit-Girl's costume is unsettling. 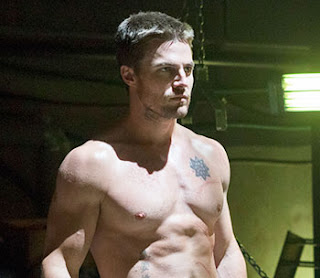 Whereas last week Diggle was doing too much Alfred to Oliver's Batman, this week, he does a decent Lucius Fox, as played by Morgan Freeman in The Dark Knight. Although, unlike Fox, Diggle is a sensible voice of reason. Stephen Amell's naked torso and Felicity Smoak both return in this episode, but we get enough of neither.

Last episode I was entranced by the bits with Oliver and Helena, and Tommy and Laurel. But here, where all four meet for dinner, I was bored and completely taken out of the show for the first time in a while. This was "Melrose Place," not a superhero drama. Zzzzzzz... 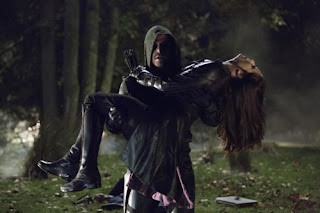 Ultimately the Melrose incident leads to China White and Frank Bertinelli going to war as well as Arrow vs the still as yet unnamed Huntress. It is a very unsatisfying conclusion, and she remains unnamed. I think that irks me more than anything.

This was not the best episode so far. The superheroics and the island flashbacks have vanished. The soap opera aspects have creeped in. I'm not happy. Hopefully things will get better for this week's mid-season finale. We'll see.