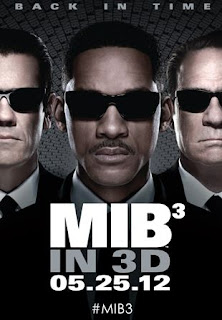 The Men in Black concept is based on the brief and rarely seen Malibu Comics feature by Lowell Cunningham, which is in turn based on the ufology myth of the men in black from the government who cover up alien encounters. Through three movies now, Tommy Lee Jones as senior agent K and Will Smith as junior agent J have protected Earth from the scum of the universe as part of a top secret organization who do what you would expect them to do - kicking alien ass and erasing everyone's memories of said ass-kicking. 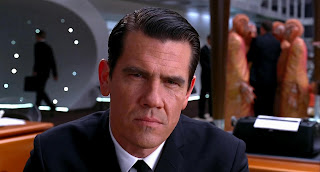 The films have been successful mainly because of Jones and Smith's almost perfect extreme buddy cop chemistry, as well as the sharp humor of the writing, and of course the cutting edge special effects. Even with all that, the first sequel was a weak entry almost ensuring MIB3 would not happen, but here we are.

The plot of Men in Black 3 bucks the odds even further, as it's about time travel. The common thinking in Hollywood, even in scifi movies, is that time travel makes people's heads hurt. Only when it is done well, like in the Back to the Future or Terminator series, does it come off successfully with mainstream audiences. MIB3 does it as well. 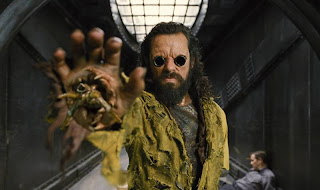 An alien villain, Boris the Animal (played by Jemaine Clement from HBO's "Flight of the Conchords" although you'd never guess it), escapes prison and goes back in time to 1969 to kill K before he can put him in jail. K vanishes from the present, so J must go to 1969 to save him and put time right. And here's where we hit the third odds-breaker. The younger K, played by Josh Brolin, is Will Smith's partner for most of the movie. His impression of Tommy Lee Jones as K is dead on, and half the entertainment of the flick. The chemistry is intact despite a new actor in an old role.

This movie is so much fun, captures the spirit of the original, and covers new territory while being funny, exciting, and fresh. The only thing that could have made this better would have been a Will Smith theme song. Recommended. I wouldn't have thought I would say this, but bring on Men in Black 4.