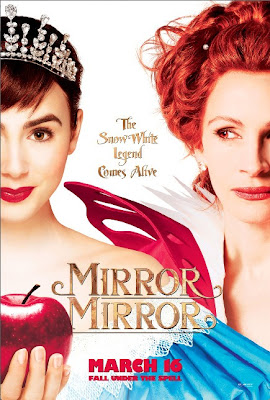 Mirror Mirror ~ Sometimes it just seems too easy to me for Hollywood to take a public domain property like a fairy tale, in this case, Snow White, and put their own spin on it. Most times though, we're not talking new spin, but a contemporary, sometimes mocking, and most times different for different's sake, look at it.

In the case of Mirror Mirror, more than a different take, we get a spotlight for Julia Roberts with her fading star to vamp and overact in the confines of a fantasy over the top role - the evil queen. Roberts is so delicious in the part, she overshadows the rest of the cast, including the usually overwhelming Nathan Lane and the seven dwarves who were particularly entertaining. And if you're fans of "Little People, Big World" and "Pit Boss," you'll see some familiar faces.

This take on the Snow White, despite the differences, was a tad predictable (and not just because most of the flick has been telegraphed in the previews either), though still entertaining. If nothing else is playing, a good afternoon out, but better a wait for rental or OnDemand. Whatever you do, stay for the Bollywood credit sequence, it's awesome.