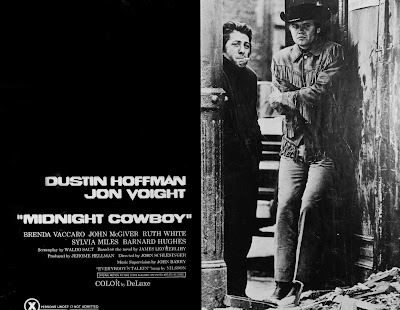 Midnight Cowboy ~ This is the movie that changed the way people thought about movies, and it was also the first and only X-rated film to win the Academy Award for best picture, although the X rating meant something a little different back then than it did later on. It cemented Dustin Hoffman and Jon Voight as the stars of the 1970s, and it forever placed the song "Everybody's Talkin'" in people's heads when walking in crowds in New York City. It also features two of film's most memorable characters, and one of its most quoted lines, "I'm walkin' here."

Based on the 1965 novel by James Leo Herlihy, written for the screen by Waldo Salt, and brilliantly director by the legendary John Schlesinger, Hoffman and Voight lead an all star ensemble cast through a tour of the seedier side of New York, a Time Square that no longer exists, and the darker side of life that still haunts us. At its core, it's a tale of friendship and desperation. 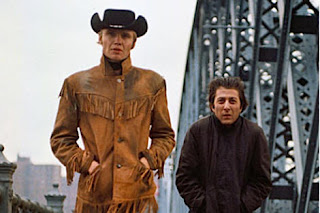 The real feat of Midnight Cowboy is bringing life, thanks to the expert direction and the performances of the actors, to two almost cartoon-like characters - naïve hustler Joe Buck and the infamous Rico 'Ratso' Rizzo - amazing. You actually grow to love them and their relationship so much that the ending may bring you to tears. This is truly one of the best films of its era, and a definite game changer. Recommended.