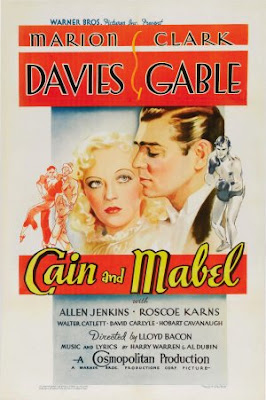 Cain and Mabel ~ This is one of those movies with stories from behind the scenes are far more interesting than the movie itself. This classic 1936 romantic comedy, a remake of the silent 1924 The Great White Way, stars a pre-trademark moustache Clark Gable and the infamous Marion Davies in the title roles.

The not so cleverly titled Cain and Mabel is the tale of a rising Broadway star who crosses paths with a prize fighter and rub each other the wrong way, so much so that they, duh, fall in love. The number of great songs and dance numbers are countered however by the terribly staged boxing matches. These folks should have had Rocky to watch back then for inspiration. Still, it's fun, and daffy Davies is a delight to watch. 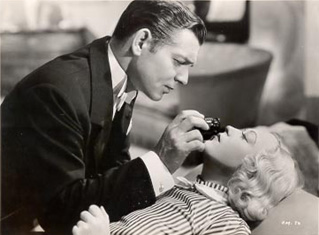 For those not in the know, actress Marion Davies was the mistress of William Randolph Hearst, and he paid for and/or demanded certain casting choices in the film. Gable was 'loaned' from another studio, and certain leading men who found Hearst's mistress attractive were banned from parts.

Marion Davies, even without her benefactor's money, was a talent all by herself. Her comedy training and below average dancing skills were bonuses for this role. And even though this was early Gable, he still demonstrated that air and power that would dominate screens in years to come. Their lack of chemistry however undoes any magic they have separately. It makes it a love story that only works when the two lovers aren't together.