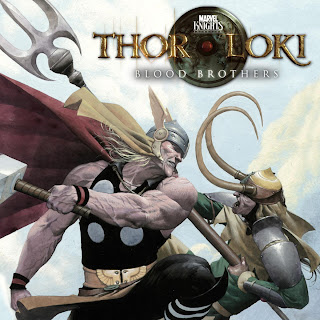 Thor & Loki: Blood Brothers ~ This Marvel Knights motion comics disc production is based on the miniseries of the same name written by Robert Rodi and beautifully rendered by Esad Ribic. It's an amazing comic, perhaps Rodi's best, and he's a man who not only knows comics but is a terrific talent as well. The words and images are pure brilliance on the page, however, unfortunately, it does not translate well to this format in my opinion.

What works on the static page doesn't come across in the same way in motion. Loki's monologues are long and tedious here, some of the art almost ugly in movement as it was beautiful still. What was a luxurious and entertaining read is a slow and boring watch. So much so that after a while all I wanted was for Thor to hit something, anything, as long as it made Loki shut up.

Two thumbs down on this motion comic, but two solidly thumbs up for the real comic. This is proof that sometimes the source material in its original form is superior. Check out the comic, forget the motion.

The motion comic is nowhere near as cool as the above trailer...