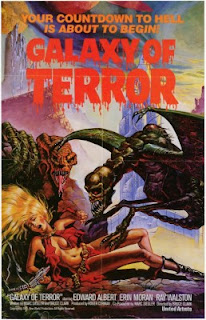 Galaxy of Terror ~ I remember this flick from years ago but had never seen it, nor had the desire to see it, until I saw it on a list of the worst movies of all time. When I saw that it was Roger Corman produced, and starred Sid Haig and Robert Englund, as well as a grown up Erin Moran, Joanie 'Shortcake' Cunningham from "Happy Days" - I had to see it. It's just as bad as you might imagine.

The movie also stars Eddie Albert and Ray Walston, and roughly follows the plot of the first Alien film. They're on a rescue ship and when they reach their destination, an unspeakable horror picks them off one by one. It's horrible. It's not even worth the MST3k treatment, it's that bad. Making sure that they can rip off as many movies as possible, the monster changes into whatever you fear the most. 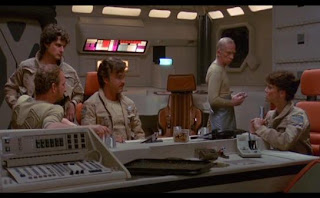 Sid Haig is kinda cool, for the short time he's in it, but even he can't save this mess. Sid Haig hated his dialogue, so he asked Corman if he could play the role as a near-mute. Corman agreed, and Haig barely says one complete line. Robert Englund is more Willie from "V" (but not as cute) than Freddy, and Erin Moran is less than a poor excuse for Ripley, no matter how hard she tries.

Both James Cameron and Bill Paxton worked behind the scenes on this flick. At least they both went on to better things later, including Aliens, the sequel to the movie Galaxy of Terror ripped off most. And if you dare watch this terrible flick - beware the Mothra rape scene. Otherwise, avoid this movie at all costs.