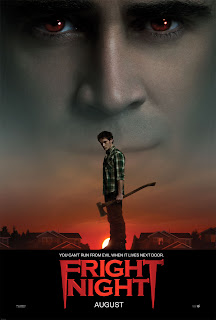 Fright Night ~ Now I've never seen the original film that this 2011 remake is based on but when I saw that there was a special movie premiere on board the Disney Dream of Fright Night starring fan favorite "Doctor Who" David Tennant, I had to be there. The audience, mostly tweens for an R rated flick, was the polar opposite of the other experiences I had had in the Buena Vista Theatre on board the ship. The kids weren't all right. Let's put it this way, up until about five minutes into the film, I might as well have been at the Cherry Hill Loews. It chilled out after that except for one or two comments (clever for the most part) and of course about a dozen screams and jumps during the scary parts.

I was surprised at how clever this was, and rumor has it the original was as well. I will have to Netflix it to find out, but that's a good thing as it's not necessarily a movie I would. I'm rather ambivalent about slasher movies - which to my misinformation this isn't even though I thought it was. Some are good and some are bad, I'm not a lover or a hater, they're just not usually my thing. Vampire flicks on the other hand, even after the recent deluge of vampire media in the last decade or so, are a guilty pleasure, but again, some can really stink as well. 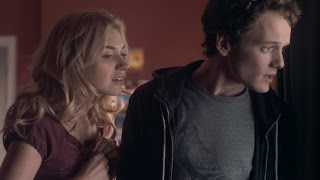 This new Fright Night stands up well on the good side. There's a lot of sarcasm, injokes and nudge-nudge-wink-wink going on here but it's a lot of fun. Anton Yelchin, Checkov from the new Star Trek, is a young man whose neighborhood is quickly vanishing one by one and all the evidence points to his new neighbor, Colin Farrell doing a Bullseye imitation sans accent, being a vampire and doing the dirty work. He turns to a Criss Angel type entertainer famed for his vampire slayer magic act, the tenth Doctor, David Tennant, for help. Toni Collette is always a joy to see on the screen, and the cameos by Chris Sarandon (from the original film) and Lisa Loeb were fun. 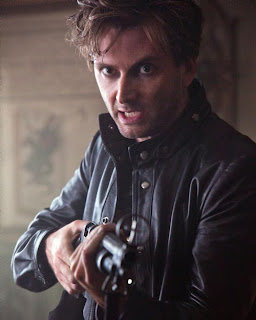 At first appearing to be quite a jerk, Tennant is the highlight of the film, along with Farrell's subtle but decisively evil vampire. There are shocks and blood galore, but not much real gore, more humor than gore really. There are a few very frightening scares, but if you're paying attention you should be able to see them coming. The new Fright Night is a fairly entertaining horror movie, worth checking out.