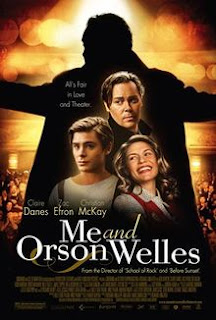 Me and Orson Welles ~ This is essentially about Orson Welles and the Mercury Theater's production of Julius Caesar in 1937. An aggressive young high school kid and wannabe actor gets hired into the play and unfortunately involved in a romance with an older woman on set. Much like Orson Welles' personality in real life, his character, so much larger than life, also takes over this kid's story. Great stuff.

Prince of Persia: The Sands of Time ~ For a movie based on a limited graphics videogame from the early 1980s, this flick has a good premise, lots of potential, but little was aspired to. Some nice special effects, some interesting plot twists and frequent nice nods to the old Sinbad movies of the 1960s and 1970s, this is worth a watch if it's on television. Good popcorn flick. 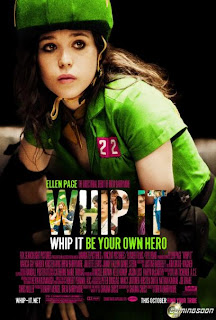 Whip It ~ Drew Barrymore's direction of this film based on the book "Derby Girl" by Shauna Cross is very good. Great drama, great comedy, and all with a heart as well. It has the feel of a contemporary After School Special, and that's a good thing. One of my favorite flicks of the year.

Formula 51 ~ This is mindless shoot-'em-up fun that is carried chiefly by the charisma of Samuel L. Jackson as chemist Elmo McElroy who has created a superdrug. Robert Carlyle from The Full Monty is also fun here as the Jackie Chan to Sam's more talented Chris Tucker. Turn your mind off, put your feet up and enjoy an hour and a half of action thriller fun.