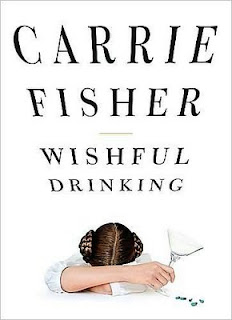 Wishful Drinking ~ The previews of this one woman show/video memoir on HBO made it seem quite funny, but I knew the facts - that Carrie Fisher has long suffered from alcoholism, drug addiction and manic depression, and I thought for sure it wouldn't be all laughs. I was pleasantly surprised.

The actress begins with the rather grim story of a friend dying in her bed but quickly recovers with her family history, which is hysterical... unfortunately probably because it's true. Her family tree is a twisted root turned in on itself and provides much entertainment in her retelling.

There's a lot of material covered here, and a lot for folks who have followed various facets of her career. If you know Carrie as Eddie Fisher and Debbie Reynolds' daughter, or if you know her as the real lead character in Postcards from the Edge, or if you know her from a little movie called Star Wars - there's something here for you.

Also, if you're watching on HBO OnDemand, like I did, don't forget to watch all the extras like interviews with her parents and the poem from Star Wars that clogs up her head. Recommended.