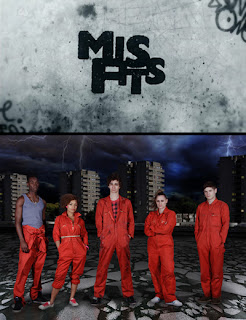 Here in the States, the concept of the super powered drama has been tried, it just hasn't really caught on. "Heroes" has come and gone, with a downward spiral from success to epic fail. Sure, we've had "Smallville," and "No Ordinary Family" is trying, and "The Cape" is coming, but it just hasn't really clicked yet. Across the pond in the UK it's not only been done well, it's been source material for more than a few successful series. They've had sitcoms like "My Hero" and "No Heroics" and more recently they've gone for young, hot and steamy with "Misfits."

Channeling the sexuality of "Torchwood" into young probates is the twist here - add in some pseudo retro punk music and a super-power-empowering thunderstorm and you have "Misfits." Lady Sovereign wannabe Kelly, when you can understand her cockney accent, becomes a telepath, athlete Curtis can turn back time, hot Alisha makes people crazed with sexual desire for her with a touch, shy outcast Simon turns invisible, and smartass Nathan - well, that would be telling - his power or lack of power is one of the big secrets of the first season.

The youths have depth, are realistic, and the cast is top rate. I'd enjoy them even if this wasn't a genre show. Series one follows them as they uncover others affected by the storm and also end up killing their probation officer. Even though it sounds a bit like meteor-freak-of-the-week from "Smallville," it never really gets that obvious. "Misfits" is fun, and thrilling, and not like anything we have here in the States. If you get a chance to see it, definitely check it out.