True Blood: Evil Is Going On 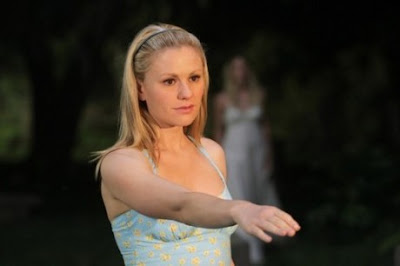 Finally, the long awaited season finale of "True Blood." It's gone by far too quick, and now the waiting begins for next summer. Next summer? Maaan...

So the faerie, the fae, Sookie's people, might also be aliens, eh? It's a curious thought. I have compared "True Blood" to "Dark Shadows" frequently this season. The gothic soap opera had a habit of doing everything within its genre and then throwing in the kitchen sink as well. We saw vampires, werewolves, ghosts, Frankenstein-ish monsters, time travel and even Lovecraftian horrors - but aliens, alien abductions and the like are more of a seventies phenomenon. Had "Dark Shadows" stayed on the air I guess they would've gotten o that sooner or later. Therefore, it's probably fair game for "True Blood" as well. Can't wait to see how it plays out. 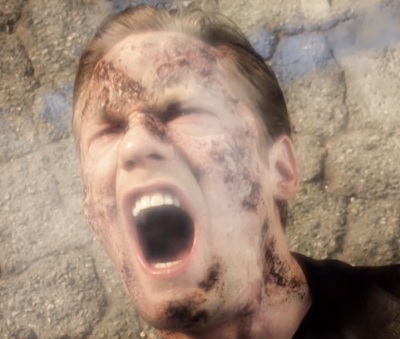 We were left with one of the more thrilling cliffhangers so far last time, Eric and Russell both burning up in the sunshine. Such a good cliffhanger, I almost wish it had been a season ending cliffhanger, but such is this season of "True Blood" - it's never what you expect.

Sookie insists on bringing Eric back inside to save him. The whole time Sookie and company were trying to save Eric inside Fangtasia I couldn't help wondering one thing - is anyone watching Russell? Couldn't he have just have crawled away to safety? Personally I was shocked when they saved Russell too. Eric's not a good listener by the way. Godric said 'forgive,' not 'save.' 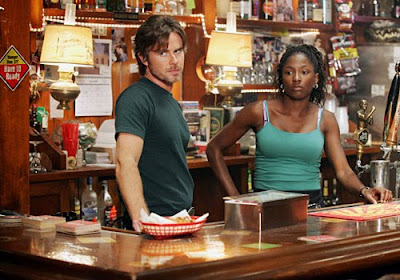 The new subplots again supercede the main plot as Sam outs himself to Tara as a shapeshifter, and frankly (pun unintended) I find it hard to believe she took it as well as she did. I would have thought she would just run as far as she possibly could from this crazy town of Bon Temps. And it's possible she did. I will miss her, but damn smart girl, if it's true.

Now I'm not fond of Sookie to begin with, but I found it really distasteful the way she was taunting Russell like a trapped animal. No matter how evil the bad guy is - I'm pretty sure the rule for the good guy is to show mercy, or at least not be a sore winner. In fact, rule number one for heroes should be, don't be a dick. Like Sookie. 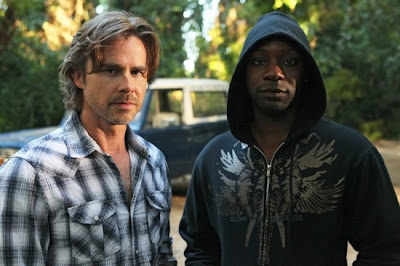 The Hotshot subplot came to a head of sorts, but mostly it's just set-up from the books and for next season. Jason is now apparently the new caretaker of the Jackson Whites, I mean the Pineys, ahem, I mean the shifters who sell V, meth and need dental badly. There's more to come, according to the books, and I would have rather seen it happen all within one season.

Lafayette's V aftershocks have taken on an interesting aspect as he has become slightly prescient. This will obviously be shorthand for the writers to tease the viewers with what's to come. As we find out that Jesus is a witch, we are assured that witches and Wiccans and voodoo will abound in the next season. But again, I am bothered. Why introduce new storylines in the last twenty minutes or so of the season finale, especially when the main story has not come to a close? 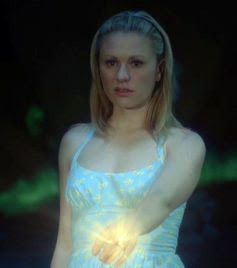 We get to see a very dark side to Bill as well as a very dirty secret reaching back to the start of the show. This is a good thing as it adds a twist to this story's ending. There is also an interesting parallel with Sam. We are told that both of their recent dark turns are actually how they have always been, we just didn't know it. I don't know however if Alan Ball and company have succeeded in making me believe this.

We leave as we began. Sookie rejoins the faerie folk. Next season should be interesting if nothing else. Did I like this one? You guess. I can't wait until next summer.