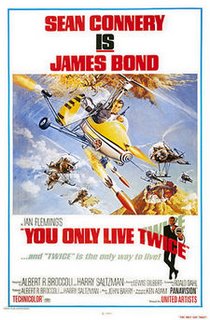 You Only Live Twice - A James Bond I had seen decades ago and not since. I was reeled in to watching it again when a glance at the opening credits revealed the screenplay was by Roald Dahl of "Charlie and the Chocolate Factory" fame. His words have always delighted and impressed me. Armed with the knowledge of his hand, some of the absurdities of this Bond-er stood out. Still, it's a Sean Connery and he can't be beat in the role. Interesting to see Charles Gray in the cast but not as Blofeld. There are some painful dated sexist sequences when it comes to portrayals of Japanese men and especially women, but other than that, a great JB flick.

Un Dia Sin Mexicanos - I came across this supposed satire on HBO while popping through the channels. It's a what-if? that explores the idea that one day California wakes up and its entire Latino population has vanished. Basically a one joke gig however, great concept, bad follow through. It might have been a terrific five minute skit on "MadTV."

The Invincible Iron Man - Something that should be remembered about all comic book properties is that the lure for the audience is folks in spandex (or in this case, armor) fighting bad guys also in spandex. This DVD flick is beautiful rendered and animated, tells a wonderful storyline, but lacked serious (or even silly) superhero action - a no-no for any superhero flick. I just wanted to see Iron Man hit stuff. Guess I'll have to dig out my videos of the 1960s cartoons for that.
Posted by Unknown at Tuesday, February 13, 2007