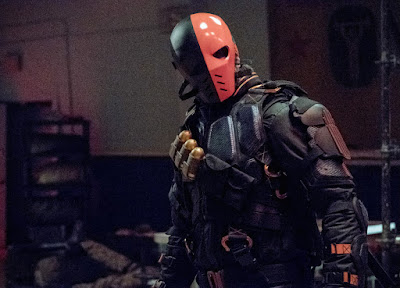 When Deathstroke returned last season I wondered aloud if a spin-off was in the wind.  Certainly there’s been more effort to spotlight the character on “Arrow” than the other two spin-offs, one successful (“The Flash”) and one aborted (“Suicide Squad”) in favor of a movie.  Here again in this episode, it seems they’re trying again.

Thematically this season with Oliver abandoning his Green Arrow identity to make more time for his son William, he has much in common with Slade Wilson who is searching for his lost son.  In the comics, Slade’s son Joseph was the New Teen Titan known as Jericho, a deaf hero who not only had the ability to possess people by eye contact, but also frequently fought against his father with the Titans.  With a Teen Titans TV series in production, one wonders how much, if any, of that will translate to “Arrow.” 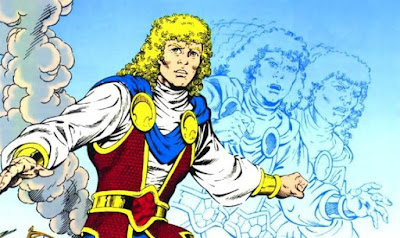 Considering that Joe has changed his name to Kane Wolfman (Nice homage to his co-creator Marv Wolfman) and Slade has been tracking him around the world, I’m guessing it won’t.  Kane has also gone into the ‘intelligence’ business and has wound up a prisoner in Kasnia, a fictional nation of tumultuous leadership that has turned up time and again in the DC Animated Universe, once even being ruled over by Vandal Savage.  Slade needs Oliver’s help to save his son. 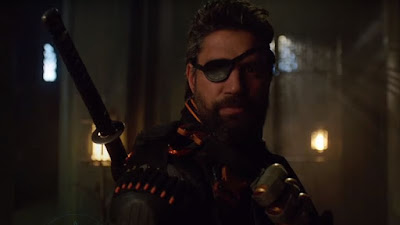 If this is a backdoor pilot for a Deathstroke, it’s a poor one.  Despite the title of this episode I was bored.  The B-plot back in Star City was far more interesting and compelling, if predictable, even with the dark matter twist.  Anyway, we get some bad espionage that reminded me of some of the more boring Bratva episodes of last season, followed by Deathstroke going all Punisher on the generic bad guys before being confronted by his son, the new leader of the Jackals.  Slade will get another chance to prove himself show worthy next episode.

We actually open however on the councilwoman, who is pushing for vigilante legislation, being targeted by a sniper.  Based on the ‘previously on Arrow’ catch-up showing Vigilante, and realizing, hey, he’s still at large, it’s obviously him.  Prometheus made us forget all about this weak subplot that by all intentions should have been Adrian Chase. 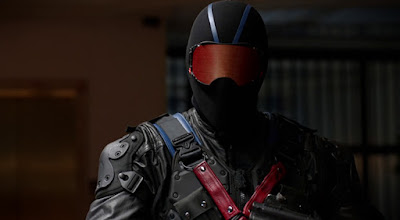 In a clash with Black Canary, where her sonic cry shattered Vigilante’s visor, he took off his mask and she got a good look at him.  He’s Vincent Sobol, her old partner, whose face looks like he somehow survived that gunshot to the head.  That of course is his metahuman ability, some sort of regeneration, possibly coupled with brain damage or derangement.  Either way it looks like he’ll be hanging around a bit, forgotten subplot or not.

Samanda Watson continues to question and investigate.  She is either playing dumb of she’s figured out exactly who everyone on Team Arrow is.  If nothing else, shouldn’t have found that all these folks all hang out at the same abandoned warehouse at all hours of the day?  And how is it the FBI can’t cooperate with say, the DEO or ARGUS on this investigation?  She’d have all the answers, and a cease and desist as well by now.

Our ‘flashback island’ this episode is thirteen years ago, in New Zealand, as Slade tries to balance his secret life with a camping trip with son Joe.  The analogy to Oliver and William painfully obvious and my back hurts from being hammered only moments in.  I did find it intriguing that Slade calls his son ‘kid’ just like he does Oliver.  Too bad he probably also traumatized his son for life, but we’ll see for sure next time.

I found it interesting that Felicity mentioned attending Iris West’s bachelorette party over on “The Flash,” but there’s no reason given why Oliver didn’t attend Barry’s bachelor party, nor is it even acknowledged.  I know Oliver can be a real stick in the mud and funless at times, but could it be he wasn’t invited?  Would Barry choose party crasher Ralph Dibny over Oliver? 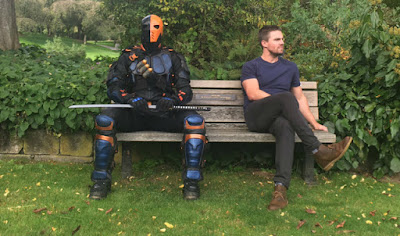 Another nice bit was Nylander calling Slade the Terminator.  Interesting sidenote, Deathstroke the Terminator was originally the villain’s full name until some James Cameron flick called The Terminator came out and DC Comics toned down its use of that term.  We also get another piece of the puzzle of what happened on Lian Yu in last season’s cliffhanger.  John says to Felicity that Slade left them in the island.