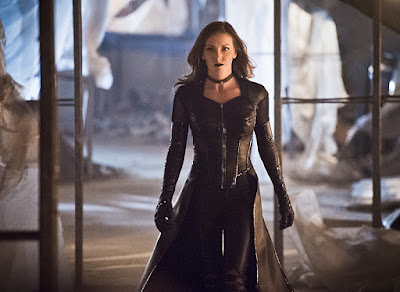 With the help of performance enhancing drugs John Diggle is in the Green Arrow gear while Oliver spends time with his son and hides from the FBI investigating the possibility that he is Green Arrow.  How long can this ruse be kept up as the Black Siren attacks again, and the looming threat of the return of Cayden James?  We’ll see in this episode of “Arrow.”

I have to wonder what the endgame is with Black Siren.  What did the showrunners really have in mind when they killed Katie Cassidy’s version of the Black Canary?  Was it always planned she would come back as a villain?  Did the actress herself want this?  This is episode four of the sixth season and I think Black Siren has had as much screen time if not more than some of the regulars.  Is she the new Malcolm Merlyn?  The bad guy who’s always there in the background? 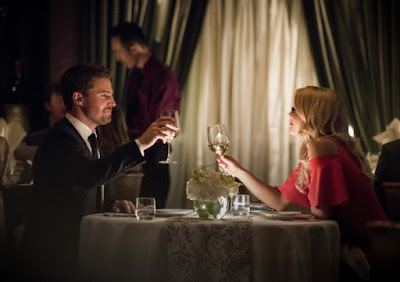 We open on a date night with Oliver and Felicity, the former really taking advantage of his free time to spend with his son.  The date feels like at best foreplay and at worst to show the role reversal (like the episode title) between Oliver and Felicity when she gets called to Team Arrow and he doesn’t.  One wonders how long Oliver can put up with this.  Will it take John crashing and burning?  I hope not. 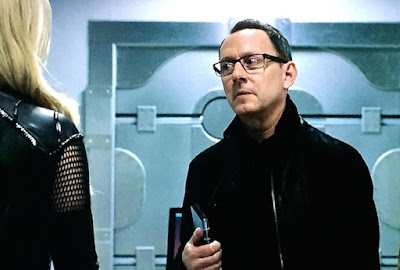 Here’s the gist, the guy who’s ordering the Black Siren around is Cayden James, the super hacker I predicted would be this season’s big bad, and he’s now in the villain game.  Enter Alena, the hacktivist from Helix who groomed Felicity last season.  She of course shows up in Felicity’s apartment looking for help against James.  Apparently his time in ARGUS’ custody turns him into a master villain and he’s planning on wiping out 4% of the world’s population.  And in case you think that’s not a lot - it’s 300 million people.  What else can Felicity do?

Reversal is indeed the name of the game.  Oliver interferes with Felicity and Alena’s mission to find a tech dealer named Amnesiac, just like old times, but in this case Felicity is the hero and Oliver the one who needs to stay safe, of course on the other hand, if Felicity, playing very much the Oliver role, had shared resources and knowledge with Team Arrow, neither would be flying blind against their foes.

Arclight seems to be the name of Cayden James’ plan to take down the internet.  The conceit is that there’s a vault that physically holds the internet.  No, seriously.  That’s where the final fight, physical and cyberspatial, takes place, with surprisingly Oliver in the Overwatch position.  I wonder if the FBI is watching.  With the internet saved, James’ plan, still vague, seems a bit clearer.  He only wanted Felicity to take down the firewall so he could upload something sinister.  Riiiight. 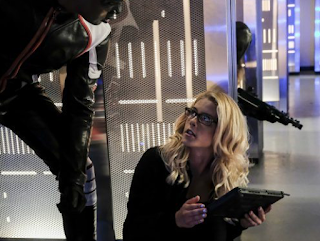 I love that Curtis is an Olicity shipper, and also the Corto Maltese name drop.  I have to say that John looks very awkward carrying the crossbow weapon, but it’s a little better on his back.  We saw neither William nor Samanda this episode despite their presence leaning heavily on events here.  We also get a name a mission statement for Felicity and Curtis’ startup - Helix Dynamics.  How long before they start creating metahumans?