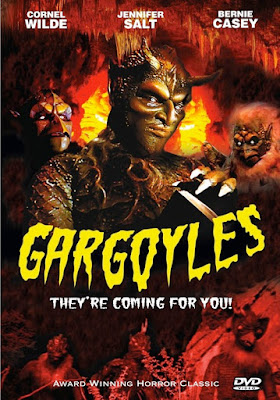 I remember very distinctly seeing this movie when it first aired on CBS in late 1972. This was at a time when my bedtime was in dispute, and by in dispute I mean I wanted to stay up late but my parents didn't.  I would slyly pull this stunt of taking too long with my homework so I would be up when whatever I wanted to see on TV would be on.  I remember purposely doing that this night so I could see Gargoyles! in its 9:30 PM time slot.

My big brother was doing babysitting duty that night with me and didn't seem to mind the movie so I guess it wasn't that bad.  He'd watched worse with me in those days before the VCR and only one TV in the house.  I also remember the next morning at school asking my third grade teacher if she'd seen it.  She was horrified, first saying she didn't watch such movies, and then that I shouldn't be up so late.

Such movies were my kind of thing though.  Raised on "Dark Shadows" and "Thriller" and Dr. Shock, this was my kind of movie even if it wasn't Mrs. Scott's.  And there were enough of my friends in class who also watched it - they were also the ones who had Aurora monster models and liked Alice Cooper, if that says anything.  Nevertheless when I saw coming attractions for Gargoyles!, I knew I'd want to see it and planned for it appropriately. 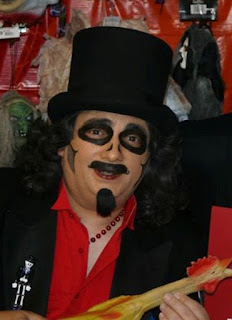 The movie has been out of print for years now, and is occasionally available on YouTube, but I most recently saw it on MeTV's Svengoolie.  Like the aforementioned Dr. Shock, Svengoolie, played by Rich Koz, is one of dozens of horror movie hosts across the country.  Svengoolie, the second to go under that name has been enjoying national success for some time now on the nostalgia network.  Sometimes he's annoying but usually has lots of good info on the flicks.  He's truly a movie fan, and that's really appreciated.

Now all that said, Gargoyles! is actually a pretty darn good horror film, both typical of its time and yet better than most.  The flick is scary as well, one wonders how I slept that night back in the day.  It also features early work by Stan Winston which won him his first Emmy.  Most frightening of all is the make-up work on Bernie Casey, former football player and character actor, who plays the lead gargoyle.  That is one scary dude.  And it was written by Stephen and Elinor Karpf who also wrote the camp horror classic Devil Dog: Hound from Hell! 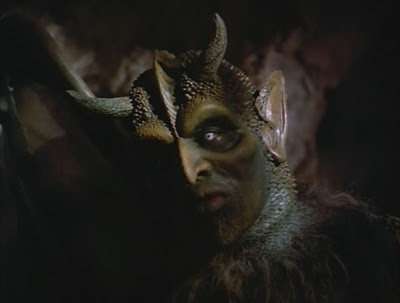 The movie opens with a montage of photos of gargoyles, interspersed with the ones from the movie, and including one from the classic Swedish and Danish silent Haxan: Witchcraft Through the Ages if I'm not mistaken and the narration of Vic Perrin.  His bit is perfect as he was also the control voice at the start of each episode of "The Outer Limits," and he tells us the tale of the Devil banished from Heaven, and his minions the gargoyles who rise up every six hundred years to battle mankind. Guess what time it is?

The premise has Hollywood leading man Cornel Wilde in his twilight years as an anthropologist/demonology/writer Professor Boley and Jennifer Salt as his daughter Diana who stumble upon a colony of these emerging gargoyles.  This was the first place I ever saw Wilde, so even his finest roles bring the Oscar nominee back to Gargoyles! for me.  Salt mesmerized me in Brian DePalma's Sisters and has done amazing work behind the scenes on "Nip/Tuck" and "American Horror Story" so for me, she's not all just this.  And she's rocking those halter tops.  Together they are perfect 1970s protagonists for this horror film. 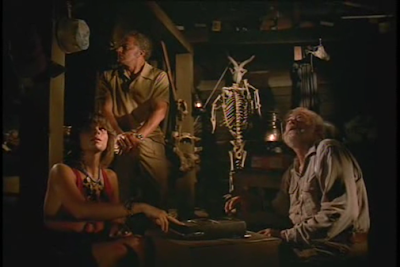 They set off into the desert, probably the same one Dennis Weaver raced through in Steven Spielberg's Duel, to visit Uncle Willie's Desert Museum.  Willie has something for the good professor, and serves a gateway to this hero's quest.  Already however the couple are being watched, lending chills before we even get started.

The Desert Museum is a tourist trap, full of crap, but old Uncle Willie (played by Woody Chambliss, a TV western regular who was also in another horror classic of the time, The Devil's Rain) does have something of value for the professor.  After nightfall he takes them out to his barn and shows them a gargoyle skeleton.  Boley disbelieves at first but listens to Willie's tales of demons at war with the Native Americans. 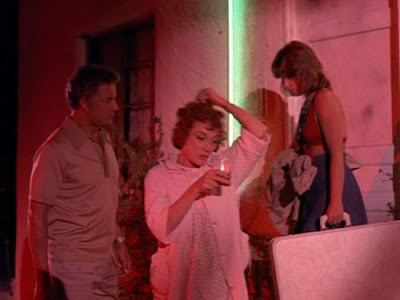 To the tune of crazy music by Robert Prince sounding like it was played on police sirens, something attacks them and kills Willie.  The couple escape with cassette tape recordings of Willie and the gargoyle skull in their beat up station wagon.  One of the monsters pursue and jump on, invoking Race With the Devil. As they get away we get our first eerie slow motion look at a gargoyle, scary.

Dad and daughter get a motel room while their car gets repaired.  The motel is run by Grayson Hall of the aforementioned "Dark Shadows."  She plays a lush who always has a drink in her hand, which is funny as she was frequently rumored to be drinking on the set of the soap and blowing her lines.  At least here it's in the script. 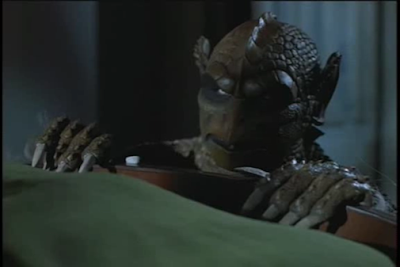 When Dad and Daughter report Willie's death to the police, leaving out all the gargoyley details, the cops immediately place the blame on local bikers, one of whom is Scott Glenn, most recently seen as Stick in "Daredevil" and soon "The Defenders."  A real young Scott Glenn.  Later on he has one of the movie best and most memorable lines, "one of them gar things is gonna get her," and he's not talking about the Podcast either.

Eventually the gargoyles attack and steal back the skull, moving in crazy scary slow motion, and featuring the one very frightening scene of the gargoyle looking over the end of the bed - a major reason I never watched this flick late at night in bed.  When a gargoyle is killed by a hit and run truck, Boley takes in the dead body for proof.  It's his undoing. 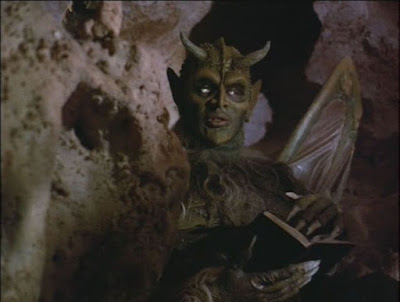 Like the skull, the gargoyles come again for their dead, and this time, they take Diana as well.  Winged head gargoyle Bernie Casey takes a shine to her and brings her home to meet his family.  The more we're exposed to the gargoyle costumes and make up the less scary they are, but by this time, we're fully invested and it doesn't matter.  We are in this world, and they're still scary.

Still, this is where the flick starts to fall apart a bit. Casey, with Vic Perrin's dubbed voice (!), wants Diana to teach him to read, so the gargoyles can get smarter and be on more even ground to fight man.  Eggs are hatching and the menfolk are getting a posse together, so time is dear. The movie spirals downward from there.

Gargoyles! is still a great horror flick, even all these years later, and even with the obviously cheap special effects.  It's a piece of my childhood, and still scares the crap outta me.  Recommended, but don't watch alone, or in the dark.