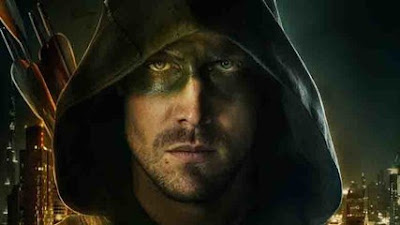 One of the things I found interesting in the aftermath of the Heroes V Aliens Invasion! Crossover was the way it seemingly ended or at least chilled ongoing plots and subplots in the individual shows. "Supergirl" tied up most of its loose ends, "The Flash" had an Alchemy and Savitar free week, the Legion of Doom took the week off from "DC's Legends of Tomorrow," and the cast of "Arrow" literally dreamed Prometheus and Artemis away. It's nice to get back to normal, almost without missing a beat. 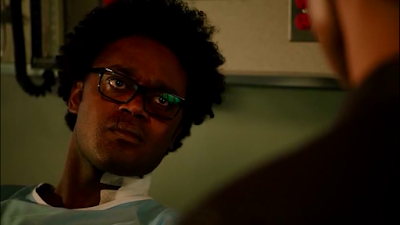 Interestingly we open on the big mayoral holiday party a surprisingly stable Thea has thrown, where she and Oliver discuss agreeing to not talk about aliens and yet do anyway for a good few minutes. Oliver's date arrives, Susan Williams, who I predict will betray him worse than Artemis, and we get small talk and character advancement until Prometheus attacks Curtis and his husband Paul as they leave. 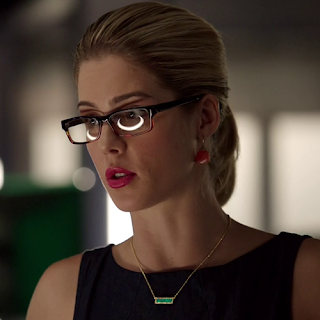 Paul is introduced to 'the gang' just as Billy Malone, Felicity's boyfriend is. If the DCTV shows have proven nothing, they've definitely demonstrated how outdated the secret identity concept is. Jeez, just tell the truth. If you can't tell the person you love the truth, that relationship is doomed. Curtis lies right up to and through his beating at the hands of Prometheus, and continues while hospitalized. I'm shocked, and my respect for Curtis has dropped.

Even when Paul confronts Curtis outright, he still lies. Paul knows that was the throwing star killer, knows Curtis has become a better fighter, can't he put it together? I was happy however that Billy wasn't falling for any bullshit. He figures out Curtis is Mr. Terrific pretty easily, now knows Prometheus is targeting Team Arrow, and wants Felicity protected. Billy should have a real chat with Paul. 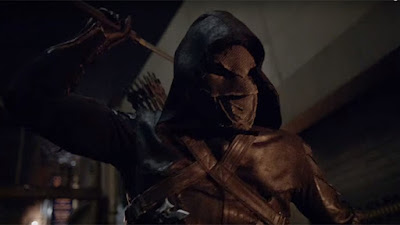 When Curtis does confess, after basically being cornered, Paul is angered by being lied to all this time. He gives Curtis an ultimatum, the marriage or being a vigilante. Yeah, Curtis chooses the latter, and is crushed when Paul leaves. On the other side of the coin, Felicity is showing the same resistance to Billy, but that takes more dangerous consequences when he's kidnapped by Prometheus.

Some convoluted clues lead Team Arrow to trap set by Prometheus, where Artemis finally shows her hand. The clue comes from a dead man on The List, Justin Clayborne, mentioned in the series pilot, but never seen until now. Flashback Island this episode takes a break from the Bratva to concentrate on this untold case. Nice to see Oliver in the old Hood togs, and highlighted by appearances of younger Diggle and Felicity. 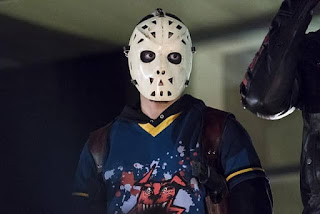 Is there any way we can get more of the new guys, Wild Dog and Ragman? I loved the gift giving bit at the Arrowcave, and the continuing bonding between the Dog and Diggle. I dug the stockings. Anyone else notice that no one got Artemis anything? No wonder she turns on them. And is weirdly not seen again. Did Prometheus kill her too?

Little details come out throughout the episode as to Prometheus' identity. He might be Claybourne's son, or he could be someone completely out of left field - I'll get to that in a moment. Prometheus stages a crime scene exactly as the Hood left it when he killed Claybourne the senior, then allows Oliver to kill a helpless Billy dressed as Prometheus. Oliver is crushed and defeated when he returns to the Arrowcave. 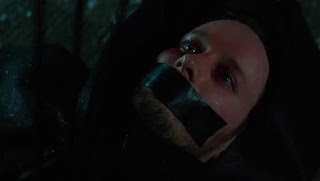 So that's Quentin down, Artemis, and Curtis effectively, and Felicity now. Also, as a seemingly afterthought, Diggle gets captured by the authorities. Oliver goes to drown his sorrows with Susan, which will surely come back to bite him in the ass. And then he goes back to the Arrowcave for the shock ending to end all shock endings. Laurel is there waiting for him. 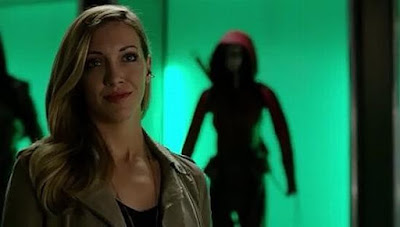 Not so much her possibly being alive, it's the possibility she might be Prometheus that startles me. With hints dropped last week during the invasion and in this episode, I have to wonder how much traction the showrunners will be giving Flashpoint as a plot device and reality reset. Could Laurel really be alive? Could she be Prometheus?